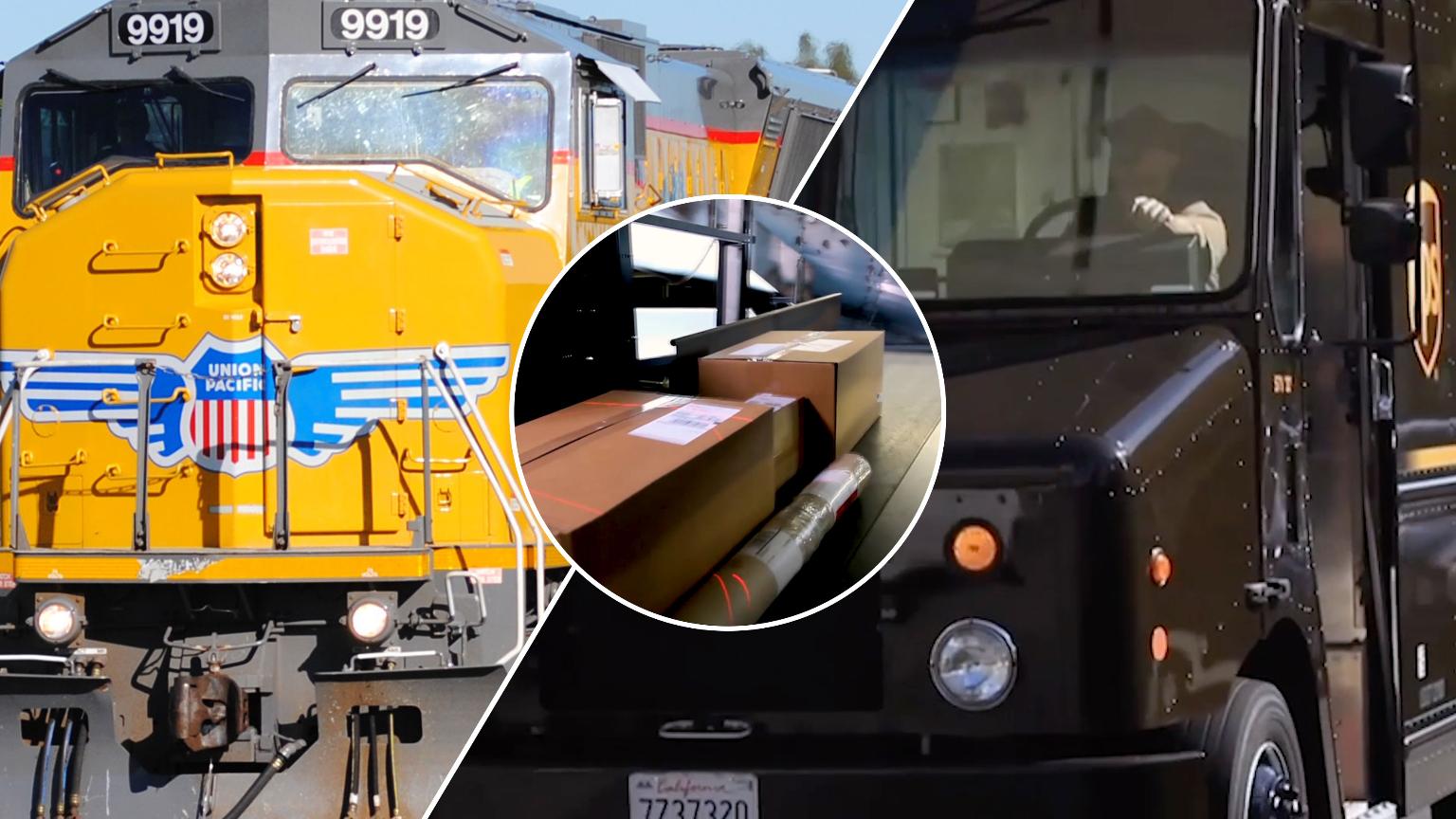 If you’re like most consumers, you probably don’t visualize that gaming console or gym equipment you purchased last night on your cell phone as traveling on a Union Pacific train en route to your porch.

But you should, especially if you chose “ground” shipment.

UPS moves an estimated 6.5% of the nation’s gross domestic product (GDP) each day and is one of Union Pacific’s largest rail customers.

Every intermodal container that Union Pacific transports for UPS carries between 1,800 to 2,000 packages.

“Our partnership with Union Pacific is a deep one, with a long history and a rich culture. For more than 50 years, we’ve been reliant on our railroad partners to move packages that are less time sensitive than other deliveries over long routes,” said Michael.

It is a partnership that Union Pacific deeply values and works tirelessly to enhance, as surging E-Commerce leads to greater demand for Intermodal service – the long-haul movement of shipping containers from ship to rail and truck – and the accompanying need for greater integration between Union Pacific and UPS.

Every intermodal container that Union Pacific transports for UPS has between 1,800 to 2,000 packages. That translates into 4,000 potential customers – the person who is shipping the product and the person who is expecting to receive it.

To put it another way, a train with 100 containers is transporting packages for upwards of 400,000 customers, many of whom are tracking their product and waiting at the end of the line for their gaming console.

“UPS is a great partner and a fantastic customer who makes our company better,” said Todd Lenczowski, General Director, Premium, Marketing and Sales for Union Pacific. “They push us to be faster, more disciplined and creative in finding and implementing solutions needed to meet the high-performance demands expected of both sellers and buyers in the E-Commerce market.”

In turn, Union Pacific offers numerous advantages when it comes to long-haul transportation, including the ability to reduce highway congestion, GHG emissions, as well as reliable service through all kinds of inclement weather. Products and goods can also be moved seamlessly from trucks to railroads and back to trucks, once deliveries reach a distribution center, said Michael.

For the past six holiday seasons, Union Pacific’s service has been deemed “perfect” by UPS’s metrics. That means the railroad delivered every load and met all its obligations to UPS during the peak season.

“We know when we give Union Pacific a load, it arrives at its destination,” said Michael.

Union Pacific also provides service to UPS on some of its most critical transportation lanes, including the East Coast ports and Chicago, with the ability to keep these critical lanes open during rain, snow, and sleet. Often, when highways and interstates are shut down due to inclement weather, trains continue to roll.

“Even if Mother Nature says you have to move a little slower, Union Pacific is still moving, helping to keep the supply chain flowing,” said Michael.

Railroads are not only reliable, they are also fuel efficient.

On average, freight railroads can move one ton of freight more than 480 miles on one gallon of fuel. In fact, although railroads account for roughly 40 percent of long-distance freight volume in the U.S., they only produce 1.9 percent of U.S. transportation-related greenhouse gases emissions.

“One of the biggest advantages that Union Pacific offers customers like UPS is our ability to transport large volumes of goods over long distances in an environmentally responsible way that relieves congestion on our nation’s highways,” said Lenczowski.

The sustainable approach to logistics meshes perfectly with UPS’s concern for minimizing its carbon footprint. In 2020, UPS avoided over 840,000 metric tons of Greenhouse Gas by using rail, and over 4.7 million metric ton since 2015. The shipping giant even offers shippers a carbon neutral shipping option, which promises to plant CO2-absorbing trees for a small additional fee.

The service that both UP and UPS offer proved especially critical during the height of the pandemic, when people were working from home, relying on both UPS and Union Pacific to deliver essential goods.

“The pandemic underscored the essential role we play in our economy and people’s lives. To me the unsung heroes of the pandemic are the men and women who kept our supply chain moving, allowing people to stay safe in their homes,” said Lenczowski.

“We are in a noble business. The pandemic proved that. Last year, we had neighborhoods holding block parties to honor UPS drivers because we connect people with the things that they need to live their lives and run their businesses, “said Michael.