Delivering Value to Our Customers

We help our customers' goods reach their destinations safely, efficiently and effectively. Part of delivering on that is maintaining open lines of communication.

Customers have multiple means of communicating directly with Union Pacific, including our National Customer Service Center and sales professionals. These one-on-one conversations ensure individual concerns can be appropriately handled.

Customers access to various automated tools through our online, secure MyUPRR portal. Customers use this site to trace and release equipment, report and revise service issues, and subscribe to automated railroad updates.

We measure customer engagement through our ongoing Customer Satisfaction Survey. By actively seeking feedback from customers, we are able to understand and address customer concerns.

Investing in the Future

Capital is critical to strengthening Union Pacific's operations. As a company that has been around for more than 150 years, we know that investing for the future is important to ensuring the long-term success of Union Pacific as a strong and competitive company. In 2014, we invested $4.1 billion to renew system infrastructure and support growth. This helps ensure our railroad and heritage live on for another 150 years. Some key investments we made included:

In today's evolving landscape, the world's energy needs are being met through a diverse portfolio of traditional and non-traditional sources. Union Pacific works to ensure uninterrupted energy delivery to help foster a strong, stable and resilient economy.

According to the International Energy Agency, the United States may soon pass Russia and Saudi Arabia as the world's top oil producer. This production has helped support an energy renaissance that is creating jobs and lowering costs for consumers at the pump. Union Pacific, along with other U.S. and Canadian railroads, is playing a significant role in helping this revival.

Throughout its history, Union Pacific has been a critical part of the energy infrastructure, hauling commodities including coal, ethanol, wind turbines and solar panels. With the increase in crude production, railroads offer the safest mode of land transportation for hazardous materials, delivering it safely 99.997 percent of the time, according to the Association of American Railroads. 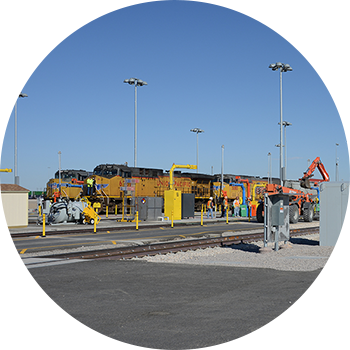 A year after Union Pacific's intermodal terminal and locomotive fueling facility officially opened in April 2014, Santa Teresa has become one of the state's hottest industrial areas, building upon the momentum that began when the railroad started planning the new facility years earlier.

Jerry Pacheco, who operates the Border Industrial Association (BIA), which represents the industrial base from Santa Teresa to Las Cruces, New Mexico, calls it the "Disneyland Effect."

"Think about all the businesses that popped up around Disneyland," he said. "The curio stores, the T-shirt shops, the gas stations – they're not associated with Disneyland, but they want to be there because it's an attractive place to be."

When it comes to Santa Teresa, there are two Disneylands. One is the Union Pacific facility; the other is computer maker Foxconn, whose factory sits on the other side of the Mexican border just a few miles away.

"We're sandwiched between these industrial zones, between these two projects that have attracted international attention," Pacheco said. "If your company is here, you get superior logistics. You have the capability of doing business on the other side of the border. There's no better place to be, and that's the Disneyland concept."

To prove his point, Pacheco rattled off a list of companies that have either been established or grown since Union Pacific announced its Santa Teresa facility, including:

And, of course, Penny's Diner and the Oak Tree Inn, which sits in the center of the industrial park. "We've got everything from warehousing to logistics and manufacturing," Pacheco said, "all located within seven or eight miles of the Union Pacific facility."

"Union Pacific gave us the opportunity not only to recruit existing businesses that came from El Paso, it allowed us to bring in new regional business," Pacheco said. "We've got a little over 3,000 people working in these parks. Not too long ago, that number was between 1,200 and 1,500, so we've more than doubled the jobs."

Even more dramatic changes could be on their way with the creation of the Westpark Logistics Center, a 166-acre development christened just last month. One of the largest industrial parks in New Mexico – and the closest to Union Pacific's intermodal facility – Westpark's first tenant will be MCS Industries, a U.S. picture frame manufacturer.

"Companies ask me, 'What's my investment going to be worth in 10 years?'" Pacheco said. "Well, it's going to be worth quite a bit because this is a hot place, and if you buy in early and you build your plant here, you're going to be in a sweet, sweet position. The value's not going to go down, and we have so much room around Union Pacific, there's still plenty of time to come in and set up your plant."