Contains a script. Do not delete.

Safety is Union Pacific's No. 1 priority. Nothing is more important than the well-being and security of our employees and the people who reside in the communities where we live and operate. Safe operations also are critical to meeting our customer commitments. We invest significant resources in training employees, developing innovative technologies and increasing railway safety awareness. Our ultimate goal is to achieve annual safety records on our way to zero incidents, building a safer America.

In 2014, Union Pacific made strides in operating safely and preventing accidents. Through our signature UP CARES public safety initiative, we continued a multi-media, bilingual public awareness campaign that educated drivers and pedestrians in various cities in Texas, Louisiana, Arkansas, California, Minnesota and Illinois about safety around railway crossings.

Union Pacific is on the cutting edge of developing technologies to improve railway safety. See this report's Technology in Safety section for examples. We believe that continued investment such as our $4.1 billion 2014 capital program and future expenditures give us the opportunity to cement our status as a leading innovator in this area.

Although derailments decreased by 7 percent from 2013 to 2014, achieving our goal of completely eliminating accidents on our railways will require further hard work. 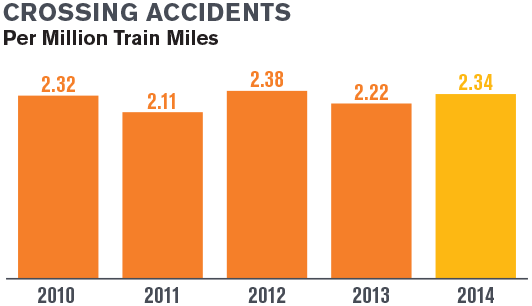 Union Pacific's public safety program is UP CARES, the Union Pacific Crossing Accident Reduction Education and Safety initiative. Through UP CARES, we host events across our 23-state network to educate pedestrians, motorists and truck drivers about how to stay safe around railroads and grade crossings. In 2014, we held 13,580 events, reaching more than 629,500 members of the public.

Union Pacific partnered with the San Antonio Spurs to keep fans safe as they traveled to and from AT&T Stadium in June 2014 for the NBA Playoffs. After our train crews noticed cars were parked too close to the tracks near the stadium, we worked with the Spurs to arrange extra security on hand to ensure motorists parked a safe distance away. Union Pacific employees also staffed a rail safety booth at games, and the Spurs played an Association of American Railroads' public service announcement, encouraging fans to "See Tracks? Think Train."

"Spurs Sports and Entertainment is proud to partner with Union Pacific Railroad to ensure our fans enjoy the game atmosphere and stay vigilant around railroad tracks. We remind everyone that when you see tracks, always expect a train," said Bobby Perez, senior vice presidentcorporate relations and general counsel for Spurs Sports and Entertainment.

Union Pacific's 2014 annual employee safety performance was the best in company history. Employees lowered the reportable injury rate to 0.98 injuries per 200,000 employee hours – equivalent to 100 employees working a full year – breaking the previous record established in 2012. The 2014 rate represents an 11 percent reduction from the 2013 reportable rate of 1.10 and demonstrates our employees' dedication to reducing injuries and achieving the company's goal of zero injuries.

In 2012, Union Pacific introduced the "Courage to Care" pledge. It represents a culture of safety and personal accountability and strengthens the degree to which each and every employee prioritizes safety as an issue. The pledge reads:

I have the courage to care. Worn with a lion's pride, it means those I work with will have my back, and I will have theirs. I pledge to shield myself and my team from harm. I will take action to keep them safe by fixing an unsafe situation, addressing an unsafe behavior or stopping the line. In turn, I will have the courage to accept the same actions from my coworkers, who care enough to correct my path. We wear this badge out of respect for each other and those who have gone before us. On my watch, we will all go home safe to our families every day.

Throughout the year, we conducted systemwide safety "stand down" meetings that focused on the role Courage to Care plays in employees' lives. Normal operations are suspended so in-depth safety conversations can take place. A meeting this fall included a video, "Courage to Care: On the Way to Zero," featuring employees in Los Angeles and El Centro, California, discussing the importance of identifying risk and returning home safely to their families. 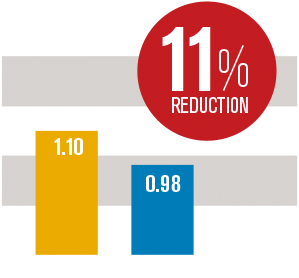 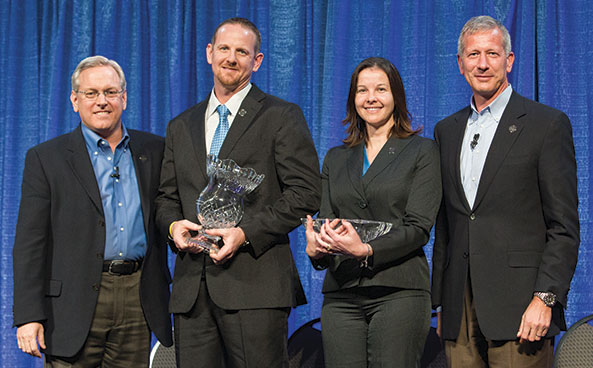 He inspired co-workers on the Houston Service Unit through employee engagement and training programs, creating a cohesive family that holds safety above all else.

His team also established "intensity rides," a process to identify risk and then apply TSC to help eliminate or mitigate it; developed goal setting cards for TSC participants; created a contest among teams and managers to see which group could complete the most TSC observations; taught TSC and job briefing classes to new hires, and helped design a new-hire safety training course.

More than 2,650 company vehicles are outfitted with Telematics. This technology uses a telecommunications device to transmit real-time information about motorist behavior, including seat belt use, speed, and acceleration and deceleration, to provide feedback that informs safe driving habits. Reaffirming the practice of maintaining a steady safe speed, as opposed to rapid increases in speed or excessive braking, Telematics is among ongoing efforts to improve fuel economy.

We installed our first inward-facing cab cameras in 2014. By the end of 2016, we expect to equip 5,000 locomotives with this technology.

The inward-facing cameras join the locomotive fleet's external-facing cameras, called Track Image Recorders (TIR), that have been providing images of track, crossings and signals directly in front of locomotives since 2005. The video is used in conjunction with the locomotives' Event Recorder data, which includes train speed, throttle and brake settings, traction power levels and horn use.

Through the years, the TIR/Event Recorder data have validated the professionalism of train crews and the same results are expected from inward-facing cameras. Pro-active performance sampling of video can increase understanding of crew behaviors, so training and coaching can be improved.

For years, our Telecommunications employees have participated in a specialized course for experienced drivers that offers safety reminders and vehicle operating techniques. Based on related safety successes, this course is being deployed throughout our organization from senior leadership to all Operating Department employees who drive a company vehicle.

We employ state-of-the-art, 24-hour security technology to detect unauthorized access. In conjunction with our own highly trained, commissioned police force, Union Pacific coordinates security efforts with U.S. Customs and Border Protection (CBP), the U.S. Coast Guard, the Federal Bureau of Investigation, the Central Intelligence Agency, the Department of Homeland Security, the Transportation Security Administration and local law enforcement. Union Pacific was the first U.S. railroad to be named a partner in the Customs-Trade Partnership Against Terrorism (C-TPAT), a CBP program designed to develop, enhance and maintain security processes throughout the global supply chain.

We take seriously our responsibility to safely ship all freight. Our goal is the same as that of our customers and the communities in which we operate: for every car to be safely delivered, while being prepared to respond in the unlikely event of an accident.

Preparedness – Preparation is critical to responding appropriately to incidents. HMM developed the Union Pacific Hazardous Materials Emergency Response Plan (HMERP), a performance-based plan that provides guidance about reporting a release, as well as a list of training requirements for those responding to an incident. Each of Union Pacific's operating divisions undergoes an annual, unannounced drill to ensure all aspects of the HMERP are in place and are being followed by employees. Additionally, we offer no-cost training to public responders, including local fire departments, so they are able to effectively respond to incidents along the Union Pacific network should the need arise. HMM also performs large-scale training events in collaboration with Union Pacific's partners in TRANSCAER (Transportation Community Awareness and Emergency Response).

Response – When responding to any incident, it is important to follow a defined and carefully laid-out process. HMM's process is designed to be easily incorporated into the public response incident command structure. Union Pacific's Response Management Communication Center (RMCC) is an around-the-clock response center where dispatchers manage calls from the public, law enforcement and others who are reporting emergencies and other incidents on Union Pacific's 32,000-mile network. RMCC follows all regulations regarding notification of local, state and federal agencies about accidents, and the company works closely with first responders throughout an incident.

Recovery – Once an incident has been stabilized, recovery begins. If a tank car has been damaged and cannot travel safely on the railroad, the contents must be transferred to an undamaged car. Union Pacific owns and operates all equipment necessary to transfer any liquid or compressed gas from one tank car to another. After a tank car becomes liquid free, HMM purges and cleans the damaged car to ensure it can be safely repaired or dismantled. Once all hazardous materials have been removed from the incident site, HMM transitions the project to the Union Pacific Site Remediation group for remediation and closure with regulatory agencies. The final steps of recovery include a debriefing with the public responders and an internal post-incident analysis. These activities are an invaluable means of augmenting the group's overall capability to respond to a hazmat-related incident. 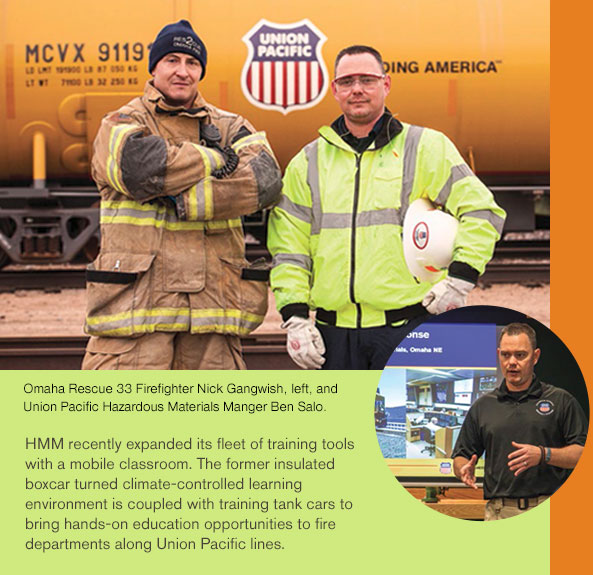 We understand the risks associated with crude-by-rail are a real concern and take our responsibility to ship crude oil, as mandated by federal law, seriously. We follow strict safety practices, and in many cases, exceed federal safety regulations.

In 2015, the Federal Railroad Administration (FRA) issued an Emergency Order and Safety Advisories addressing operating practices affecting high hazardous flammable materials transport. The issuances were followed by tank car regulations released by the Department of Transportation (DOT). Union Pacific fully supports efforts to make the rail system even safer. The DOT rules are a step in the right direction, but some of the changes will have far-reaching negative consequences for the railroads, our customers and the broader economy. For instance, Union Pacific believes electronically controlled pneumatic (ECP) brakes do not provide significantly greater safety benefits than distributed power, especially on the terrain through which our trains operate. For updates, visit our Crude by Rail Web page.

Union Pacific is introducing first responders on our rail network to AskRail,™ a near-real-time mobile application produced by the Association of American Railroads (AAR).

Union Pacific's Hazardous Materials Management (HMM) team members work with local emergency responders along Union Pacific rail lines to grant access to the AskRail app. Once first responders have downloaded the AskRail app onto their mobile device, they can enter the identification number located on a tank car to identify the car's contents. AskRail supplements the existing response process Union Pacific's HMM group uses to collaborate and communicate with emergency responders during a hazardous materials-related incident. 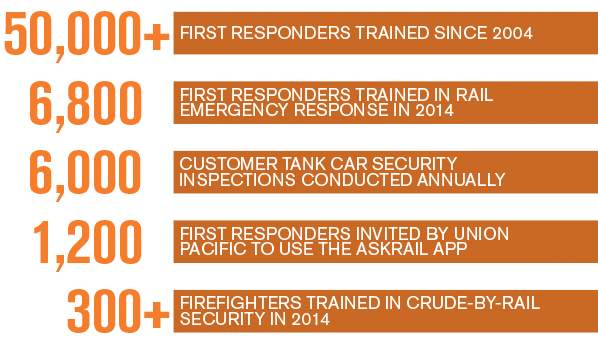 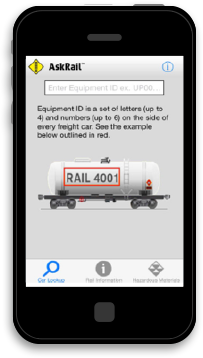 At Union Pacific, we take our responsibility for safe, reliable, efficient service seriously, and that means using all tools at our disposal to prevent derailments.

Employees engaged in continuous improvement, risk identification and mitigation, work standardization, variability elimination, Total Safety Culture and other initiatives are identifying the root causes of derailments, addressing potential risk, proposing solutions and consistently enhancing processes to improve safety and service. As a result of these efforts and our innovative technological solutions, these incidents are becoming increasingly rare. Derailments decreased by 7 percent from 2013 to 2014, from 3.24 reportable derailment incidents per million train miles to 3.00, and by 38 percent over the last 10 years. Our goal is to have zero derailments.

Some of the specific ways that Union Pacific and our employees are reducing derailments include: