By creating thousands of good jobs, partnering with local governments, investing in our network infrastructure, and volunteering time and resources, Union Pacific and its employees are constantly working to build and strengthen the communities in which we operate. Additionally, our supplier diversity program helps create opportunities for hundreds of women- and minority-owned businesses across the country.

We are particularly proud of the completion of Tower 55, a major upgrade to a railroad intersection in Fort Worth, Texas, that has been in operation for more than a century. A partnership between Union Pacific, BNSF Railway, and federal, state and local government officials made it possible to reduce delays at this intersection and thereby reduce disruption to nearby communities.

Another accomplishment last year was increasing our spending with minority- and women-owned businesses by 5 percent, compared with 2013, to more than $500 million.

Building a diverse workforce does remain a challenge for Union Pacific. We strive to create a workforce of talented employees who represent a cross-section of our communities.

We see an opportunity to continue to deepen our relationship with the veteran community. In 2014, Union Pacific hired more than 1,700 veterans, including more than 160 disabled veterans. We strive to continue serving as an employer of choice for service members entering the civilian workforce. 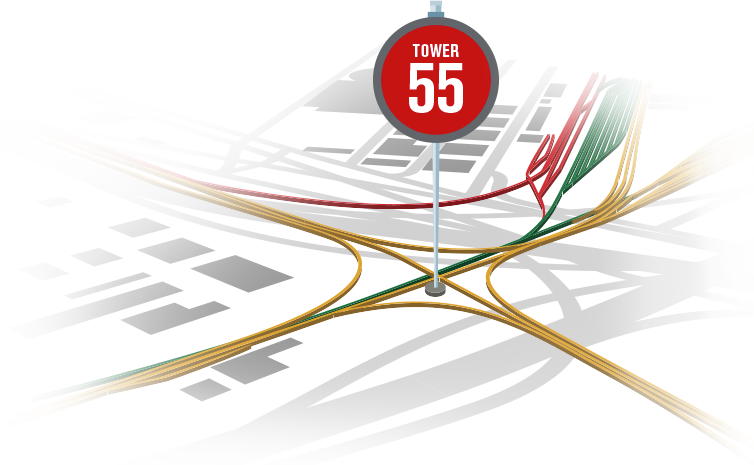 In 2014, 40 percent of new hires were referred to Union Pacific by current employees. As we seek to grow workforce diversity and meet customer needs, Union Pacific has an opportunity to strengthen our workforce by encouraging every employee to be a recruiter. 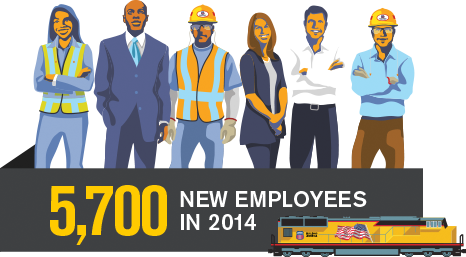 Our Commitment to Veterans

Union Pacific supports the men and women who serve our nation by hiring veterans when they return to civilian life. In 2014, Union Pacific hired 1,727 veterans, representing 28 percent of new employees, up from 24.6 percent in 2013. Almost 10 percent of these new hires are disabled veterans. Today, about 19 percent of all Union Pacific employees have served in uniform. After hiring, Union Pacific continues to support them through programs like UPVETS, an Employee Resource Group dedicated to recruiting, developing and retaining military veterans.

$150,000Donated to the wounded warrior project 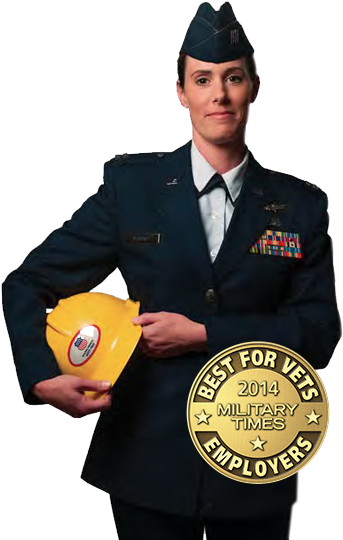 In 2014, through employee volunteering and financial contributions from the company's charitable foundation, Union Pacific supported many communities in which the company operates. Some examples include: 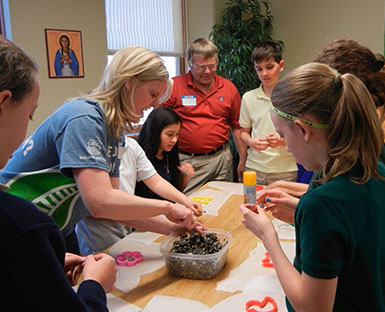 Union Pacific employees participate in a month-long Earth Day initiative each April that promotes environmental conservation. In 2014, Union Pacific collaborated with Fontenelle Forest – one of Nebraska's oldest conservation organizations and one of the nation's largest private nature centers – to build a school program focused on migratory birds.

As part of this program, Union Pacific employees volunteered nearly 1,000 hours to hold 40 events across the Union Pacific system that reached 5,000 people. The program encouraged students to actively apply Earth Day fundamentals in all aspects of their lives. Students attended a presentation on migratory bird patterns, made bird seed cookies and built paper birds.

Union Pacific contributes to the communities in which it operates by providing tools to support alternative transportation. These efforts, underway since 2010, aim to reduce our employees' environmental footprint, reduce congestion on roads and encourage residents to lead active lifestyles.

In the Omaha area, where about 10 percent of Union Pacific employees live, the company works with the Metropolitan Area Planning Agency (MAPA), an association of local governments in eastern Nebraska and western Iowa that brings together local and regional officials and citizens to address planning issues. Here's how Union Pacific collaborated with MAPA and related organizations last year: 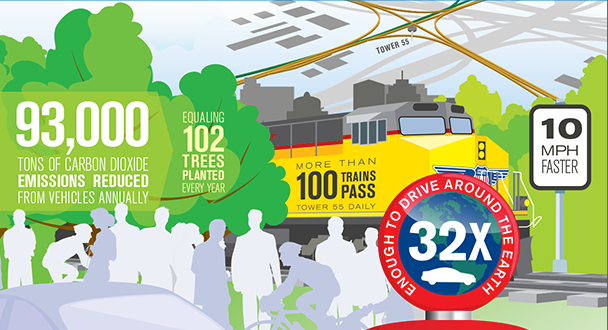 In 2013 and 2014, Union Pacific partnered with BNSF Railway and federal, state and local government officials to upgrade Tower 55, a major railroad intersection in Fort Worth, Texas, that has been in service since 1904. Over time, Tower 55 saw a significant increase in railroad traffic, and by 2013, more than 100 freight and passenger trains traversed the junction each day. Unfortunately, this volume exceeded its fluid capacity range, and trains experienced delays of up to 90 minutes daily, often blocking grade crossings.

The Tower 55 improvements benefit the railroads, communities and the environment. The rail intersection can accommodate an estimated 25 percent more train traffic and has eliminated significant train delays.

Each day, Union Pacific and BNSF Railway save enough diesel fuel to equal the annual fuel consumption of 14,000 Fort Worth commuters, reducing carbon dioxide emissions by 93,000 tons per year. Reduced motorist and pedestrian delays save commuters 100,000 hours per year.

Union Pacific's GivePLUS program encourages employees to donate money or volunteer personal time to support their communities. The GivePLUS program has two components: MoneyPLUS, which supports and extends employees' financial contributions to qualified 501(c)(3) nonprofit organizations, and TimePLUS, which provides a $250 gift from Union Pacific to organizations where employees volunteer.

It's in the best interest of our customers, shareholders, and the more than 7,300 communities where our employees and their families live, work and play to operate as safely as possible. Union Pacific employees participate in rigorous safety training programs and are trained to identify and prevent potential derailments. Keeping trains on the tracks is a full-time job for thousands of Union Pacific track maintenance employees, track inspectors and civil engineering professionals. In addition to the human expertise devoted to track inspection and renewal, we regularly inspect our track using a number of leading technologies:

Our $4.1 billion 2014 capital program contributes to these investments. Among our major investment categories we are replacing and improving track infrastructure and upgrading our locomotive, freight car and container fleets. We also made significant investments in technology improvements, including about $385 million for Positive Train Control, a federally mandated rail safety system. When it comes to investing in safety, we don't hold back. 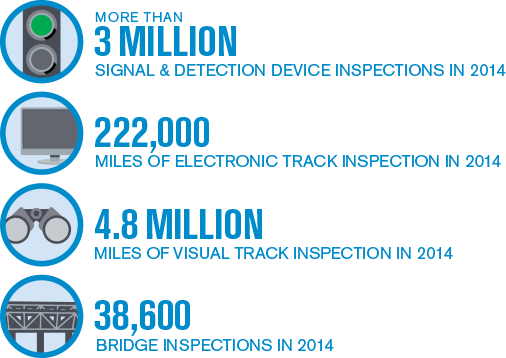 For more than 30 years, Union Pacific has demonstrated its commitment to supporting and embracing supplier diversity. Our supplier diversity program was the first among the largest U.S. railroads. The program permeates the entire organization, including purchases of fuel, engineering services, railroad maintenance and construction materials, rolling stock maintenance and technology.

Union Pacific spent $509 million last year with minority- and women-owned businesses, purchasing goods or services from more than 600 diverse suppliers in 39 states, including all 23 in which we operate. Spending with diverse suppliers grew by an average of 9.4 percent each year from 2008 to 2014, including an approximately 5 percent increase over 2013.

About 30 percent of Union Pacific's critical suppliers reported purchasing goods or services from diverse suppliers, demonstrating their support of our supplier diversity initiative.

Union Pacific is proud to work with a wide variety of companies that share our values. One such business is World Wide Technology, Inc. (WWT), a global systems integrator that provides innovative supply chain solutions and a proven approach to evaluate, architect and implement technology for its customers.

WWT looks to maintain a workforce culture that embraces diversity of people and thought. This extends to the company's operations, as well as its own supply chain. Over the past year, WWT worked with 250 diverse suppliers, spending nearly $200 million. This capped three consecutive years of increased spend with an expanding pool of diverse partners.

As Union Pacific aims toward its vision of Building America, working with companies like WWT helps provide the physical infrastructure to connect communities across the nation. We will continue partnering with businesses that prioritize investing in a diverse workforce to serve as the foundation for a stronger and more resilient economy.