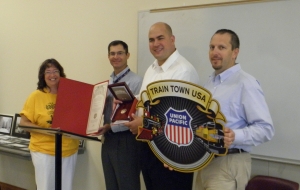 The Milwaukee, Sparta & North Western Railway, a forerunner to the Chicago and North Western (C&NW), completed a rail line through Adams in 1911. Union Pacific merged with the C&NW in 1995.

When Adams celebrated their 100-year anniversary, it revolved around the railroad coming to town. To this day, the railroad is a big part of the community. The Employee Clubs contribute to local organizations and events, and bring in the Safety Train almost every year to educate the public. Additionally, the railroad is significant to area economic development.