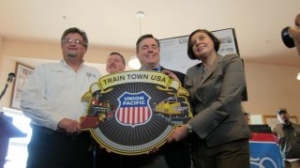 Benson was created by Southern Pacific Railroad in 1880. It became the railroad hub of Southern Arizona connecting Tombstone, Charleston, Contention City and Fairbank, as well as connecting the Southern Pacific line with the Sonoran Railroad line into Mexico - going as far as the seaport town of Guaymas. The railroad history of Southern Arizona is a very important part of what Benson is today. When Union Pacific acquired the Southern Pacific line in the late 1990s it also acquired its great history. Thousands of train enthusiasts come to Benson each year just to see the trains come through town. They watch and take pictures of the locomotives and cargo for their railroad photo collections. They remember Benson as a historical Railroad town.