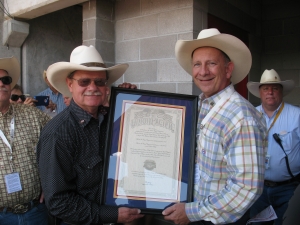 Where Cheyenne stands today initially was a campsite for U.S. Army Major General Grenville M. Dodge and his troops, who were charged in 1865 with finding a railroad route over the Laramie Mountains. The construction of the Union Pacific Railroad across Wyoming from 1867 to 1868 opened the state to permanent settlement, and Cheyenne was incorporated in the fall of 1867.  It quickly developed into a hub for shipping and railroad maintenance. The rapidly growing railroad network provided a relatively safe and a much quicker form of travel for both freight and people. The golden spike marking the completion of the first transcontinental railroad was driven May 10, 1869, at Promontory Summit, Utah, by officials of Union Pacific and Central Pacific. Development continued in Cheyenne, and a second main line track was constructed through there in 1900.