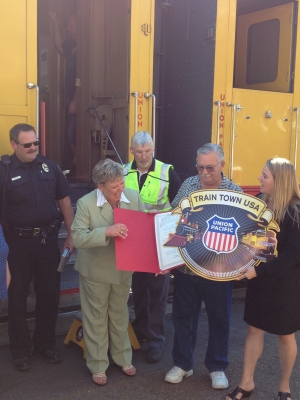 Dunsmuir, Calif., has always been a railroad town. It owes its existence to the steel rails that run through it. Incorporated in 1906, Dunsmuir was a vital part of the train system. Steam locomotives moved up the canyon, stopping in Dunsmuir to add more power units, enabling the consists to pull up the steep grade north of town.

The railroad was a major employer in town. Hundreds of people worked for the business, both on the trains, and repairing them at the facility located in the heart
of town.

"Our lives were governed by trains. Their huge, huffing bodies, hissing out steam as they lumbered through our mountain valley, were like angry Minotaurs who demanded our deference and tribute. In the dark of night their whistles cried out to us, reassuring us that our world, which depended so entirely on their movement, continued. The whistles called to us, telling us the time of day, the time to eat, the time for work. The rhythms of the trains were the rhythms of our lives.

"We rode the trains. We, who knew little of the world outside our canyon. We, with our free passes, passes to the world, traveled up and down the rails, visiting aunts, uncles, brothers and sisters, those who were no longer part of our world of trains, those who had left to find a larger existence." By: Caroline Reginato Hamlin

Dunsmuir is a train town.

With the advent of the diesel electric locomotive, engines became more powerful and more reliable. Fewer people were needed to keep the trains moving. Yet the railroad kept its commitment to Dunsmuir, and continued to maintain its facility in Dunsmuir, providing work for the local community.

The Union Pacific Foundation is the town’s main benefactor. Through its generous donations, Dunsmuir continues to be a proud part of railroad history.

The mission of the City of Dunsmuir is to preserve its railroad heritage and natural resources while encouraging its small town culture and economic growth, and Dunsmuir is proud to have Union Pacific as a partner in that mission.