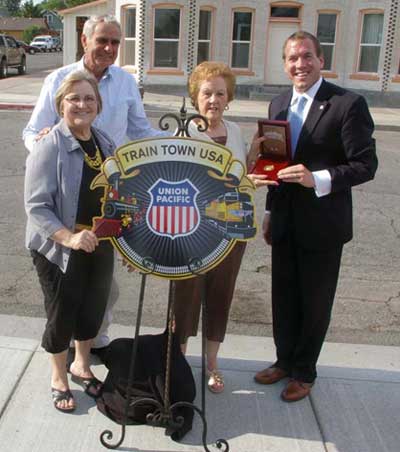 Glenns Ferry is rich with Union Pacific history. During the early years of the railroad, Glenns Ferry was an important stop for trains. There was a roundhouse where steam engines were serviced and could be turned around. Union Pacific's main line runs through the middle of town.

In 1914, the Historic Opera Theatre was built for Vaudeville performers to provide local entertainment. Those entertainers traveled on Union Pacific trains, stopping to perform at small towns along the way. The theatre is once again used for stage performances, and when a train coming through town during a performance blows its whistle, the show stops, the audience stands and sings, "I've Been Working on The Railroad," and then the show resumes. This 20-year tradition is a favorite of theatre patrons who often ask, "Will there be a train tonight?" They also notice with disappointment if no train came through during a performance.

A grand hotel, which still stands today, was built to accommodate the early performers, as well as passengers and train crews. The deep whistle and rumble of the steam engines were an everyday part of life and always will be remembered by the people who experienced them. News of a steam engine coming through town nowadays always draws a crowd of spectators and applause.

The local museum has an entire room dedicated to railroad artifacts.

Until 1973, Glenns Ferry was a railroad terminal where train crews changed, thus many or the town's residents were Union Pacific employees. The local agriculture business depends on UP for shipping many of their products. The railroad tracks separate the north and south sides of the town. On many occasions, a train going through town gives residents 'justification' for being tardy to an event, or at least an opportunity to slow down, wave at the engineer and listen to the clickety clack of the rails as it passes.

Glenns Ferry is a living example of how the Union Pacific has influenced the way of life for an area. It is very much a railroad town!