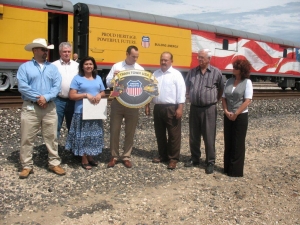 A railroad town of 5,000 in Robertson County, Hearne is 18-25 miles north of Bryan-College Station and Texas A&M University. The town sits at the intersection of UP's major north/south and east/west lines through central Texas. The former Houston & Texas Central and International & Great Northern lines crossed in Hearne. Later, it was the Southern Pacific and Missouri Pacific lines that intersected in Hearne. Still other lines (like the Hearne & Brazos Valley as well as the Calvert, Waco & Brazos Valley) ran nearby. Seven different Union Pacific subdivisions now come into Hearne and its environs. This, along with the fact that TX6, US79, & US190 all cross in Hearne, has given the town its nickname of the "Crossroads of Texas."

The sounds of train horns, activated crossing guard arms, rail cars bumping together, and the clickety/clack of trains are the sounds of Hearne.