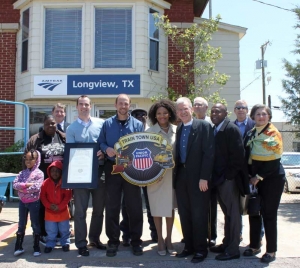 While the small settlement of Earpville was created in approximately 1850, the City of Longview's actual existence is a product of railroad expansion following the Civil War. The Southern Pacific first acquired 100 acres of land on April 7, 1870, from farmer O.H. Methvin, and when railroad surveyors were laying out the town site from atop Rock Hill, they proclaimed "what a long - view." Commercial train service at Longview began on February 22, 1871, and then on May 17, 1871, Longview became the first incorporated city in the future Gregg County.

In 1871, Longview was the westward termius of the railroad and due to its location, many persons traveled into Longview for trading, making it an important regional trading center thus stimulating the town's economy and increasing the demand for more railroad expansion. In 1872, the International Railroad built a connection between Longview and Palestine which joined with Southern Pacific about a mile east of the Longview depot, creating the Longview Junction.

In 1878, 12 miles of 3-foot narrow gauge railroad was built from Longview to Camden (now Easton.) Since the Texas and Pacific (T&P) Company was standard gauge track, all passengers and freight destined for points on the narrow gauge had to change trains at Longview since the cars weren't interchangeable. Each company erected its own depot, but growth was centered on the T&P Station downtown and at the Longview Junction which was home to railroad division offices and maintenance facilities. With T&P's excellent rail connections, Longview quickly became the economic hub of East Texas. Products of the successful railroad system in the Longview Junction were the luxurious Mobberly Hotel, boarding houses, restaurants, saloons and the Barner Sawmill. These businesses played a significant role in the city's economy by providing jobs and circulating currency in the local community.

Longview's dependence on the T&P was illustrated whenever the Railroad Company moved its division offices and shops from the Longview Junction to Mineola in January 1929. This relocation removed 700 families and a large payroll from the Longview area and reduced the population to pre-1910 levels. In 1937 a delegation of Longview leaders traveled to Kansas City to petition the Missouri Pacific Railroad for a new depot; the facility was built in 1940 and is now, after being acquired from Union Pacific by the City, being renovated for 21st century passengers. During the 1940s through the 1960s, Southern Pacific continued to fuel Longview's economy by transporting cement, steel, consumer goods, oil, timber and agricultural commodities and, of course, passengers.

In 1976, Missouri Pacific merged with Texas and Pacific. Soon after the merger, in 1982, Union Pacific absorbed Missouri Pacific's operations. Currently, Longview is a major crew change location on the Union Pacific and according to the Longview Economic Development Corporation averages 50 through-freight starts per day, three local freights and eight switch-engine starts per day. The switch engines are operating 24 hours per day with 24-hour supervision by yardmasters handling approximately 450 cars per day in the complex.

Union Pacific and the City of Longview are in their third century of partnering to create a vibrant and thriving community.