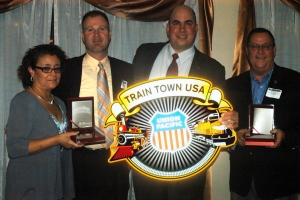 Sometimes referred to as the Hub City, Rochelle's rail history began one year after its incorporation in 1853, with the completion of the Air Line Railroad between Chicago and the town of Lane, which would later be renamed Rochelle. A forerunner of the Union Pacific Railroad, the Galena and Chicago Union Railroad built into Rochelle in 1855. A second main line track was built by the Chicago and Northwestern Railway Company (C&NW) between 1898 and 1899. Union Pacific merged with the C&NW in 1995.