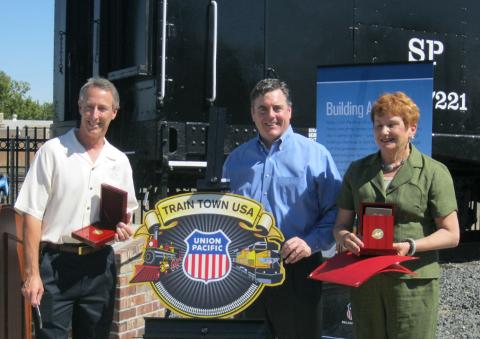 In the late 1800s, at the intersection of the Central Pacific and California Central railroads, sat a town known as Junction. In 1906, when the railroad transferred is terminal facilities from Rocklin to Roseville, Roseville began to develop into a major West Coast railroad center and was incorpated in 1909.

The railroad always has been one of the area's most important economic development engines, spurring trade, supporting the growth of the agriculture industry and ancillary businesses, increasing residential development, and serving as one of the major employers in the area with a peak of about 6,000 employees in the 1940s and 50s.

In 1996 when Union Pacific acquired Southern Pacific, it commenced a $145 million expansion program in Roseville, which was dedicated in 1999, marking the return of Roseville as a major West Coast rail center.  The completely rebuilt 780-acre Roseville yard reflects Union Pacific's commitment to its customers to provide world-class transportation services, and for the community, the expansion marked a joyous occasion signaling once again, that Roseville was the most important railroad center west of the Mississippi River.

Marking the entrance to downtown Roseville is the Southern Pacific steam locomotive, No. 2252, a static display that pays homage to Roseville's railroad heritage.

The revitalized Historic Old Town and Downtown Roseville include a viewing platform of the rail yard.  Roseville celebrated its centennial anniversary in 2009, with Union Pacific providing strong financial and community support.  UP employees rode the city's railroad-themed float, along with the Roseville City Council, waving to the crowds along the Pasadena parade route in the 2009 Rose Parade.  The City of Roseville has long enjoyed a strong partnership with Union Pacific, working on areas of mutual interest for the benefit of the community and commerce.