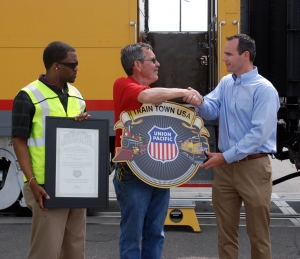 Wagoner was named for Henry "Bigfoot" Wagoner, a dispatcher with the Katy Railroad in Parsons, Kan., who saw the need for building a railroad switch a few miles north of Gibson Station. The request was granted and switch was built. When Roadmaster Perry telegraphed the message "Wagoner's Switch is ready," the town had its name.