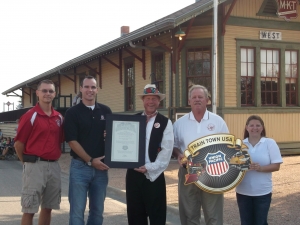 The first settlers of northern McLennan County arrived in the 1840s. They were farm and ranch families drawn from the East by the rich lands made available with the government sale of land to build schools in Texas. The farming community centered on a fresh water spring that became known as Bold Springs.

The Katy Railroad was laid between Hillsboro and Waco in the fall of 1881, and the path of the railroad cut through land owned by Thomas West, a farmer and also postmaster of Bold Springs. A train depot was built on the land he sold to the railroad company and the new depot included a post office. From that time forward, it was known as the West Post Office.

The railroad brought prosperity to the area during the 1880s. Then, on June 11, 1892, West was officially organized into a town. It had become the center of commerce for the area. There were cotton gins, grocery stores, churches and schools. Many of the farmers and businessmen of West contributed to the success of West as a great little farming community.

Many of the descendants of the original settlers continue to farm the lands and run the businesses still today.

Union Pacific merged with Katy in 1988. The West Depot is now home to the city's railroad museum and information center.