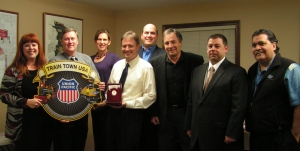 In 1848 Warren and Jesse Wheaton and Erastus Gary gave their land to the railroad company so that a rail line would come through their land holdings. The first DuPage County station was built in 1859 right here in Winfield.

The train depot was the first building in Winfield and today is the oldest remaining depot in the State of Illinois. In 1849 when the Galena and Chicago Union Railroad company completed construction of track as far as Winfield, John Hedges built the depot, where he served as the first stationmaster and postmaster. The Chicago & North Western Railway constructed a third main line track in 1923-24. Union Pacific merged with the C&NW in 1995.

Winfield began because of the railroad and has over the years appreciates what the railroad has done for our small town.