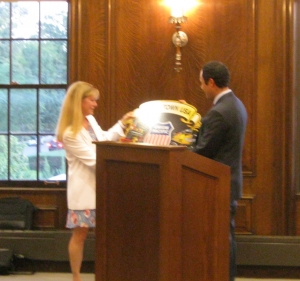 In 1854, in anticipation of the Chicago & Milwaukee Railroad coming through Winnetka for the first time, Charles Peck and Walter S. Gurnee, president of the Railroad, created the original subdivision of Winnetka. The construction of the line was completed in 1855.

The first train stopped at Winnetka as it made its inaugural trip to Waukegan. The first Chicago and North Western (C&NW) railway station in Winnetka was Hubbard Woods (originally named "Lakeside"), built in 1857 - and the third, the Elm Street Station, was constructed in 1895. This historic station was completely renovated by Metra and Union Pacific in 2011. The second mainline track was completed through Winnetka in 1899.

The grade separation of Winnetka's train tracks began in 1938 and was completed in 1942 as a part of the Federal Works Project Administration (WPA) program, thanks in part to the involvement of President Roosevelt's Secretary of the Interior, prominent Winnetkan Harold Ickes. The project eliminated 10 railroad crossings, added seven bridges, and excavated 915,000 cubic yards of earth. Winnetka remains the only community on the line to have depressed tracks. Winnetka is still home to three train stations along its 3.51 miles of depressed track.

Union Pacific merged with the C&NW 1995.