Striking a Balance on the Great Salt Lake 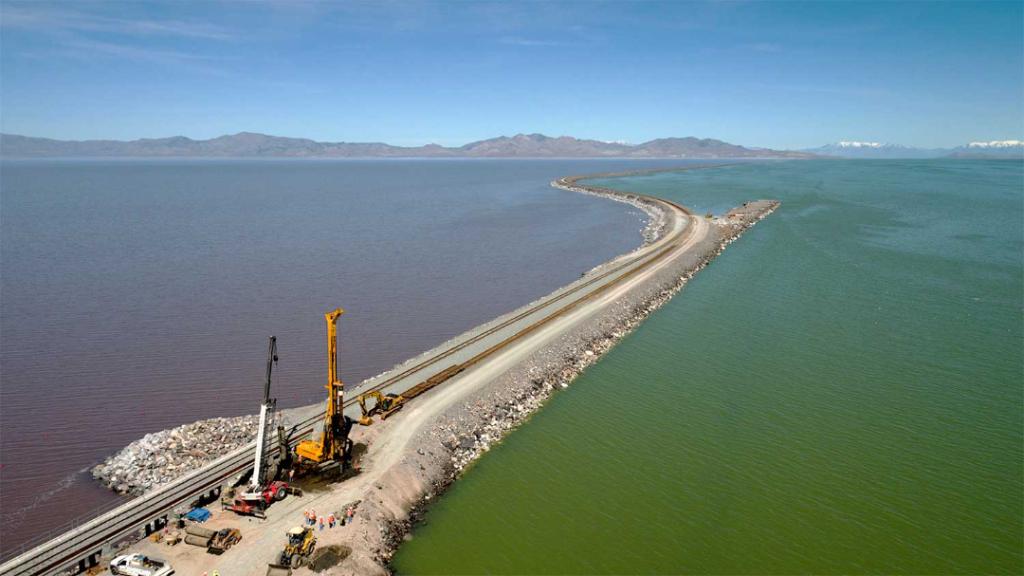 At first glance, the Great Salt Lake looks like any other lake. Nestled below the Wasatch Mountains, its serene blue-green water attracts flocks of hungry seagulls. It's not until you get a bird's-eye view that the lake's most unique characteristic is revealed: The north side isn't blue-green at all, it's an eerie, otherworldly pink. 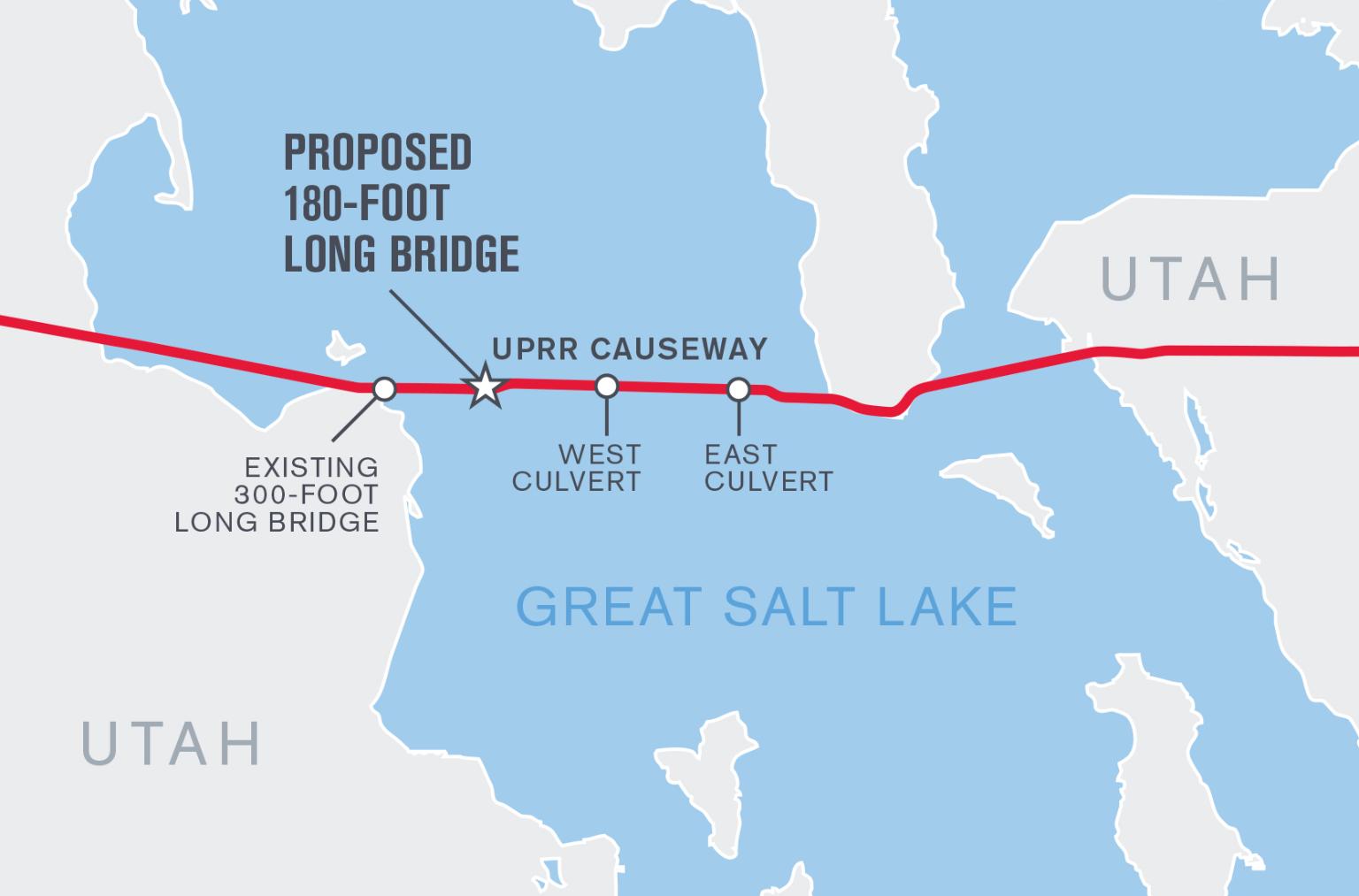 A 180-foot bridge, along with an adjustable earthen control berm, is being constructed on the west end of the causeway.

This oddity and a few other unique characteristics of the lake's ecosystem are why Lynn de Frietas loves the lake.

"The Great Salt Lake is an opportunity to understand something strange," said de Frietas, executive director of FRIENDS of the Great Salt Lake – an organization dedicated to protecting the ecosystem of the largest salt water lake in the Western Hemisphere through education, research, advocacy and the arts.

"It's not a conventional lake," de Frietas said. "It's significant, hemispherically – especially for migratory birds. The lake's ecosystem isn't replicated anywhere else. I also love the lake because it's a part of who Utahns are – part of our history, cultural perspective and sense of place. I mean, it's the namesake of Salt Lake City."

Cutting through the heart of de Frietas' beloved Great Salt Lake is Union Pacific's railroad causeway. Stretching 20 miles across the lake, the massive slice of land is sometimes referred to as the Lucin Cutoff.

A Bird's-Eye View of the Great Salt Lake Causeway

Accessing the causeway from the west requires more than an hour of rough travel through Skull Valley, a desolate desert named for the gruesome skeletons settlers discovered upon arrival. Skinny free-range cattle graze among the dust kicked up by passing cars traversing the winding gravel roads.

Sharp hills of ballast climb about four feet from a single-lane dirt road, and at the top, Union Pacific's main line stretches into the distance. Once on top of the causeway, the views of the surrounding landscape are striking. Snow-capped mountains peek through a strange foggy haze while below, the two sides of the lake remain in clear contrast.

Originally established as two independent rock causeways extending from each shore, with a 12-mile wooden trestle bridge in the middle, Southern Pacific created the route in 1902 as an alternative to tracks laid through the Promontory Mountains north of the lake. The shortcut saved time and money.

The bridge was replaced in 1959 with the structure that exists today: A rock-fill causeway containing two culverts large enough for fresh water and small boats to pass through.

The causeway became Union Pacific's property when the railroad merged with Southern Pacific in 1996. It wasn't until then that a problem was discovered by Union Pacific engineers – the entire structure was sinking.

Diving inspectors reported cracks in the side walls of both culverts directly under the tracks in 2011. "We determined in 2012 that it was not safe to operate on the west culvert, because it could collapse and take the track out of service," said Mark McCune, who worked on engineering aspects of the causeway project for several years.

"Imagine taking a stick and bending it in your hands. Eventually it will snap."

The culverts' cracks were caused by the sinking causeway, which has settled 15 feet below its original construction level. Because it's situated between two faults in the earth's crust, the layer of earth just below the bottom of the lake had fallen away, leaving a gap filled with a primordial pudding made of loose silt, ooze and biological deposits from dead brine shrimp.

"The culverts were slowly sinking and bending into the gap," McCune said. "Imagine taking a stick and bending it in your hands. Eventually it will snap." 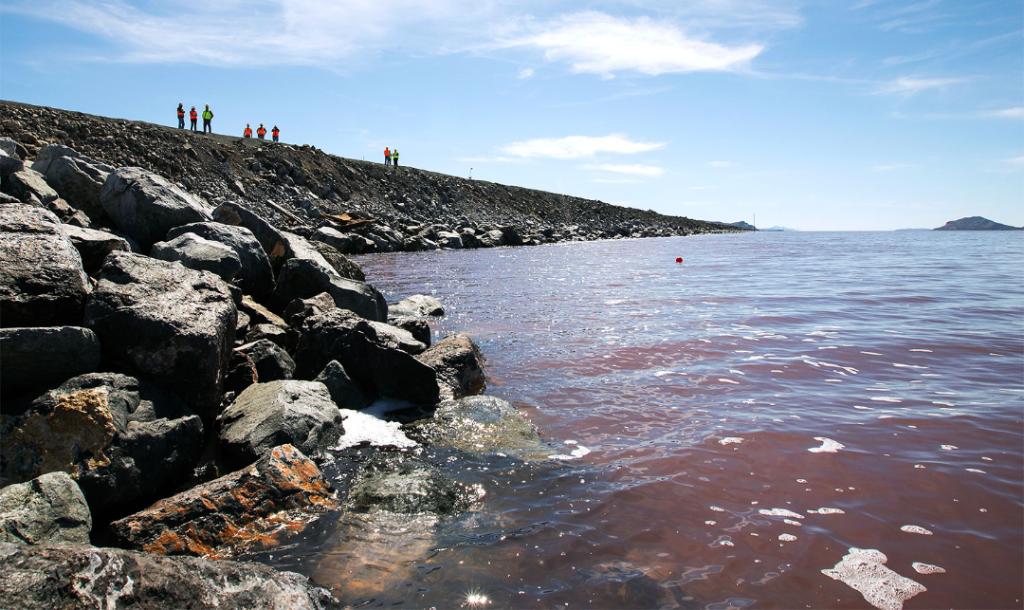 The north arm of the Great Salt Lake appears pink due to the salt-loving halophile bacteria that call it home.

The U.S. Army Corps of Engineers granted permission to close the west culvert in November 2012. The cracks in the east culvert, discovered in 2011, were found to have progressed significantly by 2013, and with approval from the U.S. Army Corps of Engineers, it also was closed. With the culverts closed, water only permeates through the rock-fill causeway, meaning significantly less water and salt pass from the south arm into the north arm of the lake. Over time, the north arm of the lake has grown saltier, and the south less saline thanks to three contributing fresh-water rivers.

This imbalance impacts Utah's economy. Companies mine magnesium and natural salts from the lake. The saltier the lake, the more they can mine.

Then there's the brine shrimp, another major Utah export. Extreme salinity levels aren't compatible with the tiny crustaceans, which can't survive in water that's too salty or too fresh. Brine shrimp eggs are used in aquaculture to feed some types of fish and baby shrimp that don't survive well on artificial feed. Utah supplies one-third of the world's brine shrimp supply, which contributes $57 million annually to the state's economy. If the Great Salt Lake's brine shrimp population starts to decline, it could negatively impact world-wide seafood prices.

Brine shrimp also are an important part of the Great Salt Lake's unique ecological system. Along with brine flies, they are the main food source for migratory birds. The lake is a massive refueling station for birds as they complete migrations from places like South America, Russia and Mexico. The Eared Grebe, a water bird, actually doubles its weight eating the Great Salt Lake's brine shrimp before completing its migration south for the winter.

And while restoring flow between the north and south sides of the lake is critical to Utah's economy and ecosystem, keeping this important rail route in operation is critical to Union Pacific's network. Without the causeway route, rail traffic would be diverted to the Shafter Subdivision, south of the Great Salt Lake, resulting in the need for more trains, more fuel and longer wait times for Utah drivers.

In the late '60s and early '70s, Kidd Waddell, who worked as a hydrologist for the U.S. Geological Survey, helped create an intricate computer model to simulate how the Great Salt Lake's water and salt flowed through the causeway and its culverts.

"When Union Pacific was ready to do computer modeling for a new causeway bridge, they asked if I would help update the model," Waddell said. 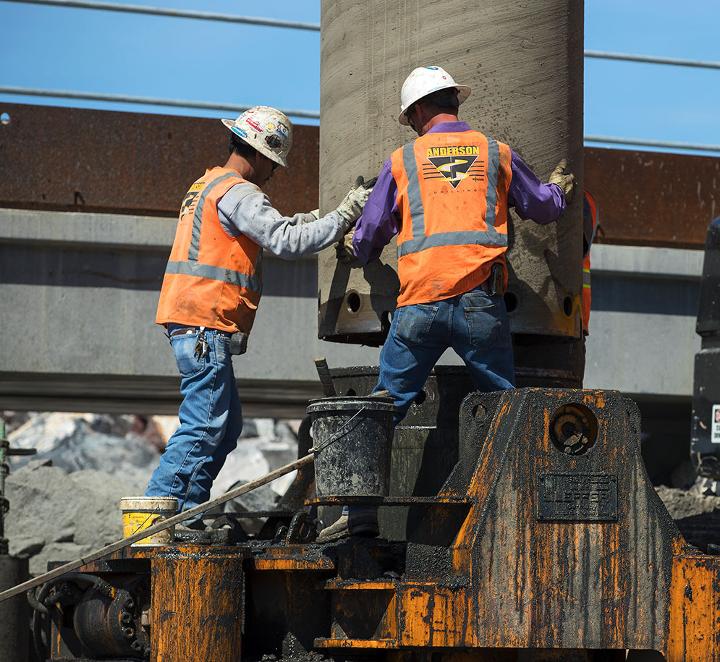 Construction crew members position a pipe casing to facilitate pre-drilling operations at each pile location. Piles are long poles, usually made of concrete or steel, used to support bridges built on soft soils. The new causeway bridge is supported by 49 piles.

The computer model replicates the Great Salt Lake's bi-directional flow – the water flowing from both directions (more saline from the north, less saline from the south). "The computer model describes these bi-directional flows, along with the lake's physical properties," Waddell said. "The model allowed us to determine what bridge width and depth would duplicate the amount of water and salt transfer the culverts provided."

Sarah Null, an assistant professor of watershed sciences at Utah State University, thought the proposed bridges were a perfect opportunity to conduct a study of her own. "A third party hadn't done any research on what the various bridges Union Pacific proposed would mean for the lake," Null said.

Null also used the model developed by the U.S. Geological Survey to conduct her independent study. The results of Null's study echoed what Union Pacific and the U.S. Army Corps of Engineers had determined: A 180-foot bridge, along with an adjustable earthen control berm (an embankment between two rounded pieces of land a few feet from the north side of the bridge), would strike the best salt balance.

"It's an innovative and elegant solution."

"The berms are very progressive," Null said. "They can be built up or removed. This solution is adaptive. In 20 years, if we decide something's not quite right, or ecosystems are declining, there's something we can do to manage salt transfer. It's an innovative and elegant solution."'

Construction of the bridge and berms is under way, and expected to be completed by September 30, 2016. Once the bridge is open, Union Pacific will monitor changes in the lake until 2021. 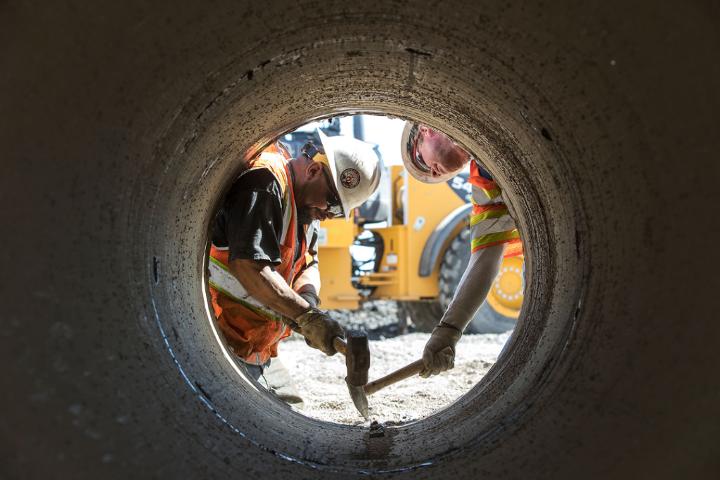 Although there are still unanswered questions, de Frietas and the FRIENDS of the Great Salt Lake maintain a sense of optimism about the lake's future. De Frietas hopes everyone with an interest in the lake continues to come together to solve whatever problem might come up next.

"With any luck, we can use the lake as a unifying factor," de Frietas said. "It's a refuge next to a growing population, and it's a generator of a tremendous amount of economic growth, research, camaraderie and problem solving. I hope all of us can make a commitment to do what it takes to keep the lake and its ecosystem healthy for future generations."