Olsen Forges Ahead in Sustainability 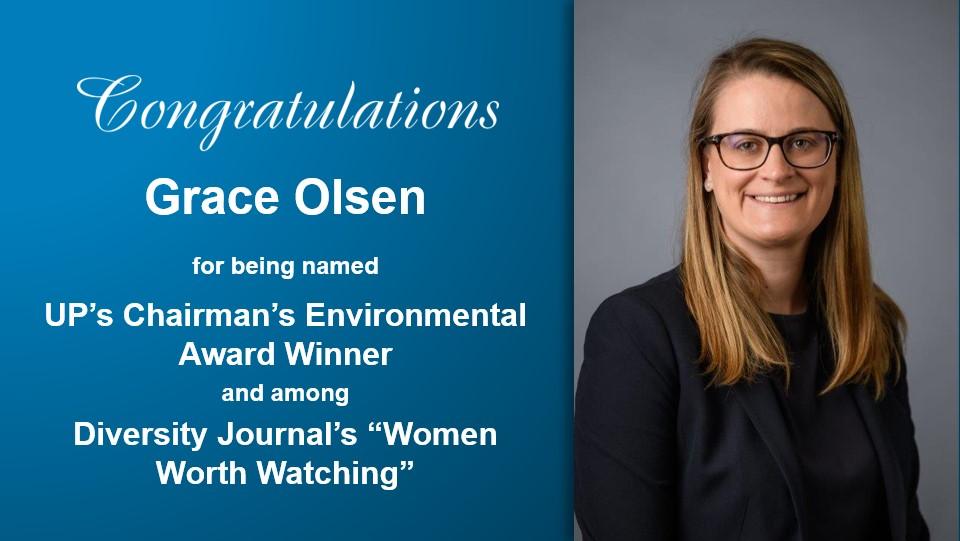 Led by a spirited determination for change, Grace Olsen, general director-Locomotive Engineering and Quality, Mechanical, is breaking new ground in environmental sustainability – and her work is not going unnoticed.

Olsen’s commitment to the environment earned her Union Pacific’s 2022 Chairman’s Environmental Award, the railroad’s highest honor for environmental stewardship. She also represented the railroad earlier this year as a nominee for the Association of American Railroads’ (AAR) John H. Chafee Environmental Excellence Award.

However, Olsen’s influence does not stop at sustainability. Her ongoing dedication to her craft earned her a spot on Diversity Journal’s 2022 “Women Worth Watching” list, honoring extraordinary women in leadership who have made a name for themselves in the professional sphere.

In a Diversity Journal profile, Olsen explains her personal philosophy, heavily influenced by her grandmother, is the reason she has made it so far in her career.

“There are many people who have influenced my life along the way,” Olsen said. “And it has made me realize that my personal philosophy is that every experience, interaction and relationship is teaching you something.”