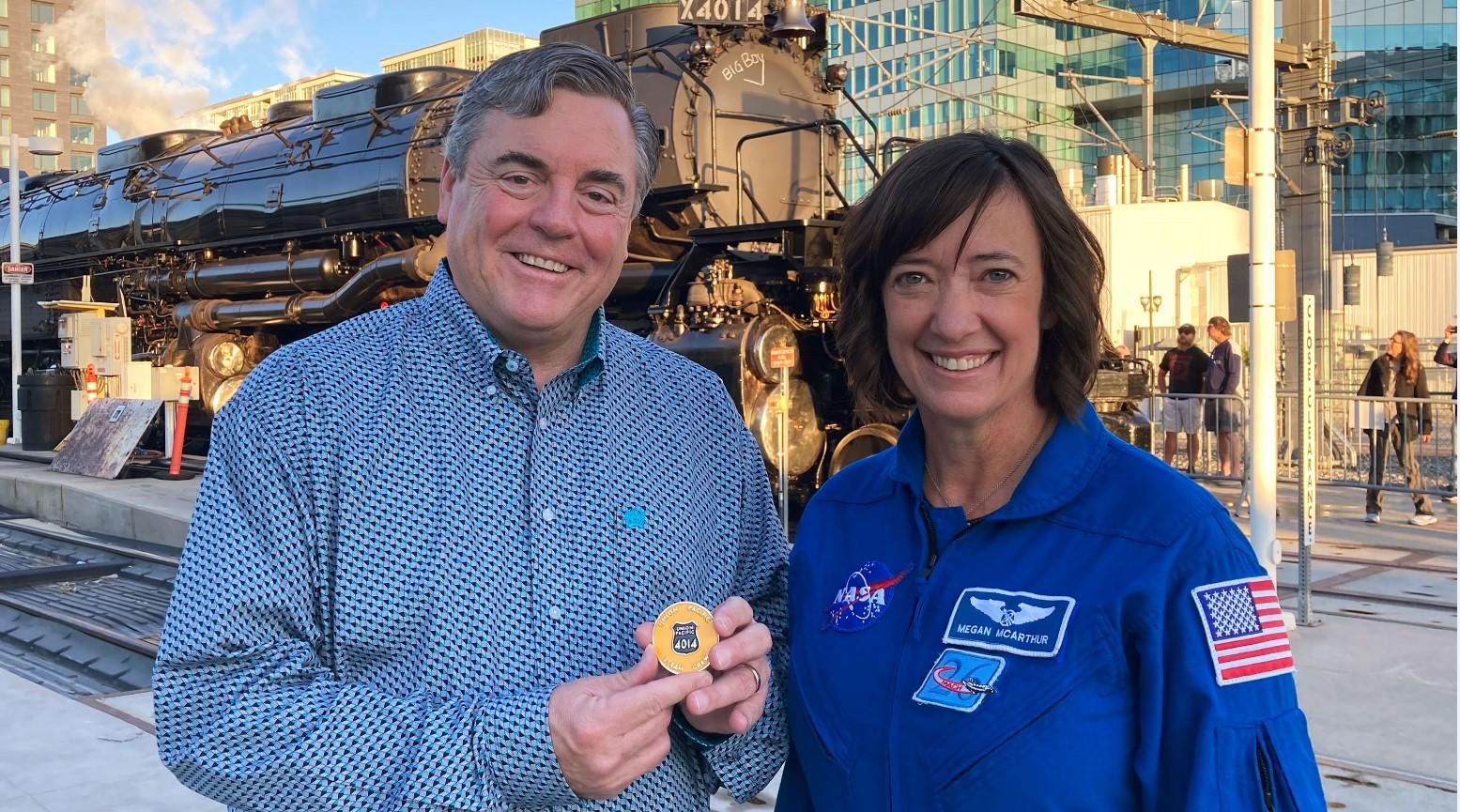 Union Pacific's Big Boy No. 4014 locomotive may be forever tied to the Earth, but one astronaut believes the famed steam engine shares a lot in common with mankind’s drive to explore the heavens.

Big Boy and the International Space Station are both testaments to humanity’s ability to dream big and push boundaries, says Megan McArthur Behnken, a NASA astronaut who took a Big Boy challenge coin to space with her in 2021.

“We are talking about two marvels of engineering that human beings dreamed about and turned into reality,” said McArthur Behnken.

Megan McArthur Behnken spent six months on the International Space Station in 2021, a multinational research lab that has been orbiting earth for more than 23 years. She and the coin traveled more than 3,000 times around the Earth. Now, the coin that she took to space will also be on display at the Union Pacific Railroad Museum.

McArthur Behnken will be appearing Aug. 27 at the Union Pacific Railroad Museum, where an event will be held to discuss the technological innovations that fueled both the transcontinental railroad and space exploration. The coin that she took to space will also be on display at the museum.

McArthur Behnken returned the coin to Union Pacific last month during Big Boy’s stop in Denver, Colorado. She told Scott Moore, senior vice president – Corporate Relations and chief administrative officer, that she was pleased to return the coin that honors Union Pacific’s Heritage team and the work they do to preserve railroad history.

“We are so grateful and honored that you chose Big Boy and its history to highlight on your historical and scientifically valuable space mission. It was an out-of-this-world experience for us at Union Pacific,” said Moore.

We love trains in my family! One day I will take my son to see the reenactment at #GoldenSpike, and we are definitely going to chase down #UP4014 when I get back on Earth. Cheers to the Steam Crew that restored Big Boy Locomotive 4014 in time for the 150th Anniversary! pic.twitter.com/bJAeOGFmMF

McArthur Behnken spent six months on the International Space Station in 2021, a multinational research lab that has been orbiting earth for more than 23 years. She and the coin traveled more than 3,000 times around the Earth.

As part of her trip, McArthur Behnken was allowed to bring 1.5 kilos of personal items to commemorate people or organizations that have been important in her life. McArthur Behnken took a Big Boy challenge coin in honor of her son, Theo, 8.

Theo has loved trains his entire life. His love affair started with cartoon trains like Thomas the Tank Engine, but his interest expanded to real trains as he got older. His mother and his father, Bob Behnken, who is also an astronaut, began to read stories to Theo about historical trains, including stories about Big Boy and its restoration.

“There came a time when trains with faces were no longer cool, and only the real trains would do,” said McArthur Behnken.

McArthur Behnken will be attending an event Aug. 27 titled “From Steam Engines to Rocket Ships: Pushing Boundaries” at the Union Pacific Railroad Museum from 12 p.m. to 4 p.m. The museum will be providing fun crafts and activities to stoke visitors’ interest in science.

McArthur Behnken will be on site for photo opportunities and to answer questions from 2 to 4 p.m.

The event is free and open to the public.