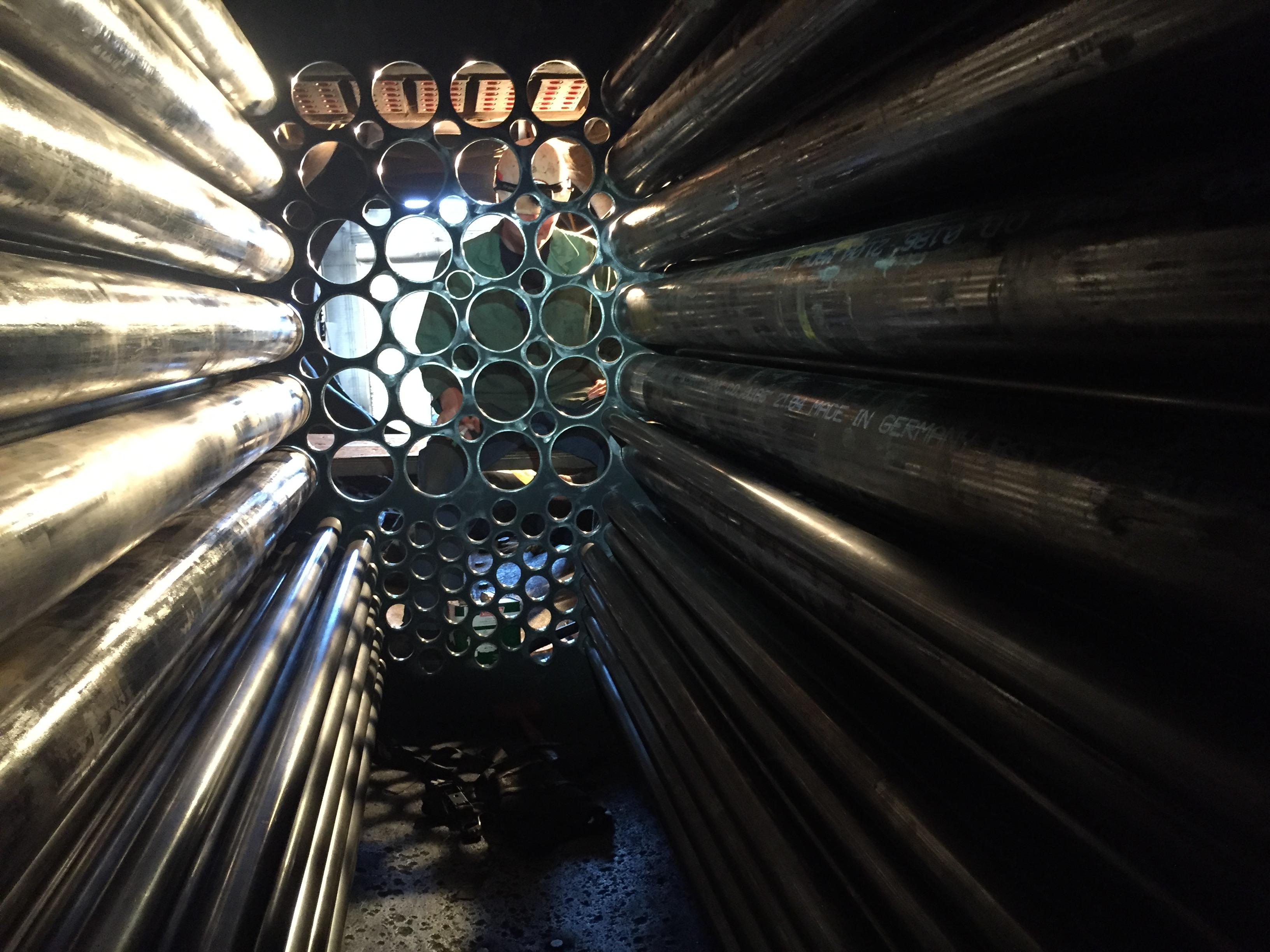 Left, the interior of the UP No. 844 looking forward through the front tube-sheet.

Big news! The Union Pacific steam team has begun prepping locomotive No. 844's boiler for one of several hydrostatic inspections.

The hydrostatic inspection uses warm water to simulate 300 pounds per square inch of pressure inside the steam locomotive's boiler. Before the inspection can occur, all of locomotive No. 844’s tubes and flues must be installed using special tube and flue expanders.

There are 58 large five-and-a-half inch pipes, called flues, inside No. 844. When fire is burned in the firebox, the combustion gasses travel through the tubes and flues to the front of the locomotive and come out the smoke stack. The flues are a critical part of transferring heat from the fire to the water in the boiler; they also house the super-heater units that give the modern steam locomotive its power and efficiency.

As work began on the flues, the team ran into an unexpected challenge. Critical parts arrived in the wrong size.

"The material we ordered was supposed to be in a specific diameter, but it arrived a little too big," said Ed Dickens, senior manager of Heritage Fleet Operations. "To solve the problem, we had no other alternative but to make a machine to fix it."

The UP Steam Team focuses on preparations for No. 844's boiler testing.

The machine was created out of a 100-ton hydraulic press. "We brought in two giant I-beams," Dickens said. "We took apart the hydraulic press, and using the I-beams, made a swage machine. A swage is a machine used to shape metal. This particular swage was designed to reduce the diameter of each flue. It’s quite a neat process, but it meant all hands on deck."

Since a lot of the exterior steam and air piping on No. 844 has deteriorated, the steam team had to create new piping for almost everything. The entire crew formed an assembly line to accomplish the big, monotonous job.

"We’re replacing nearly all the steam and air piping," Dickens said. "We’re bending it to fit the various locations on the boiler and under the cab. We’re making clamps and brackets to secure the pipes to the locomotive. I wish I could say we’re just putting a puzzle back together, but we’re actually re-manufacturing parts of the puzzle."

Once the locomotive passes the hydrostatic inspection, the team will start to reassemble the locomotive’s air brakes and install an all-new custom cab deck, floor and bracing. The most exciting part: all this work leads toward the steam test, which involves actually steaming up the locomotive.

Dickens said many departments at Union Pacific are helping make the restoration of No. 844 happen. "We’re putting in tremendous hours," he said. "A lot of departments are standing right behind us from Omaha. Everyone’s really doing a tremendous job." 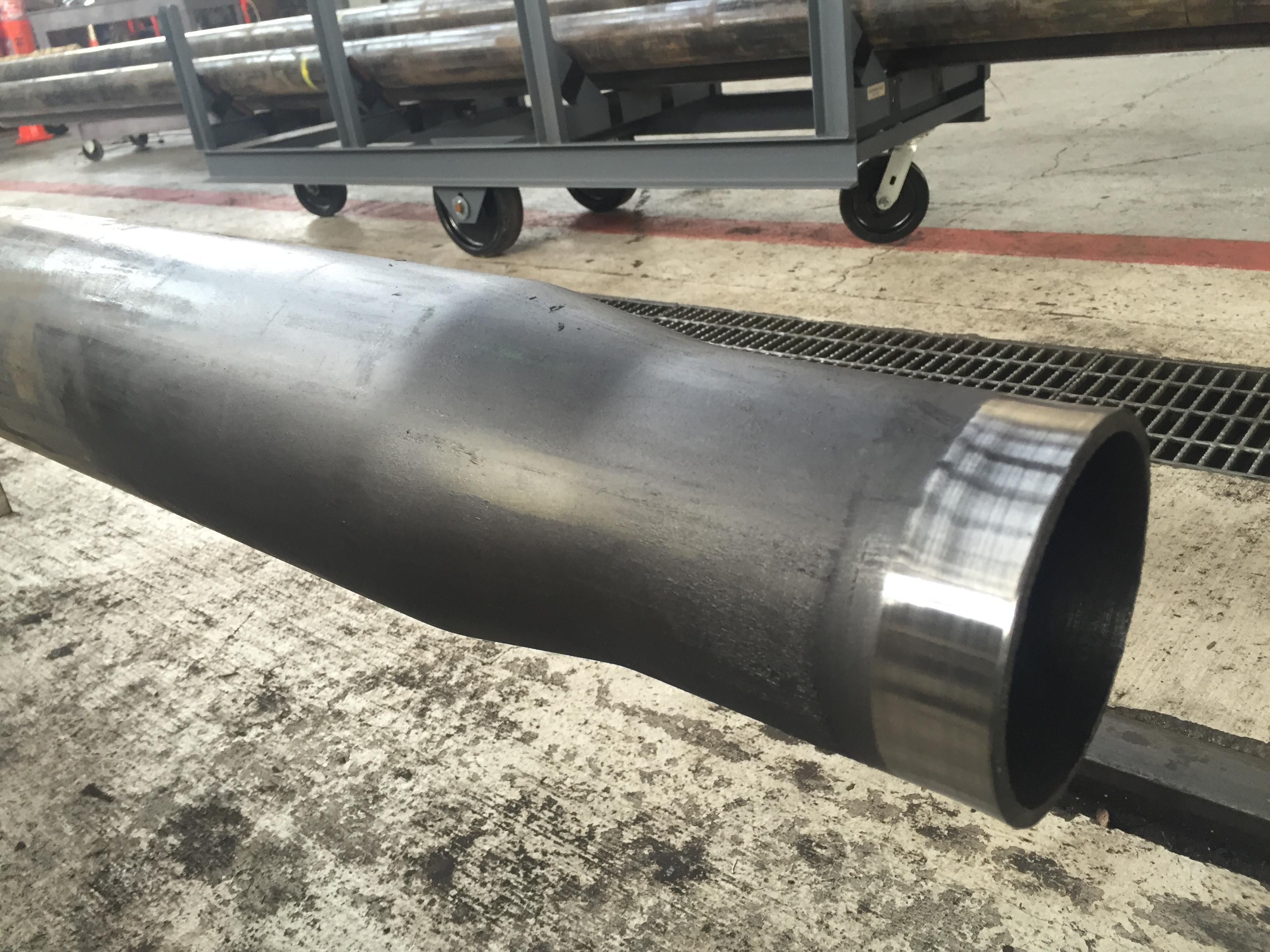 "All of the tooling and everything we’ve talked about in these updates on 844 is usable on the Big Boy," Dickens said. "The pipe bending, stay bolt and specialty boiler tooling, the stay bolt materials, all of it. When No. 844 is finished, we’re going to maintain the level of focus on the Big Boy."

Dickens is proud of what the crew has accomplished so far, and he’s looking forward to the exciting milestones that lie ahead.

"We’ve got a lot of great craftspeople here," Dickens said. "When you stop and take a look at everything we’ve accomplished so far, it’s just mind-boggling. It really is something to hang our hats on."