From left, UP Steam Locomotive Shop personnel Kirt Clark, Don Crerar and Jimmy Thompson perform a risk assessment with Senior Manager Ed Dickens prior to beginning work on the inside of No. 844's firebox.

At the heart of every steam locomotive is the boiler.

It's where the steam is made to push the cylinders, rods and wheels. The boiler is where the power is generated to make a mammoth, 455-ton piece of steel come to life. 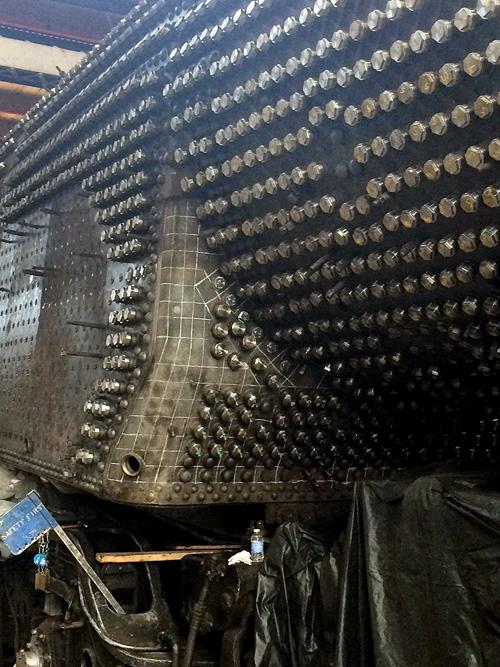 The brand new caps installed on locomotive No. 844. With the new caps in place, the Steam Team manually performs hammer testing. To perform the test, two hammers are used to tap each bolt -- one hammer remains stationary. By alternately tapping each hammer the team can determine the integrity of the steel bolt by the tone and vibration of the sound waves.

The boiler also is among the most complex and important parts of a steam locomotive, said Ed Dickens, senior manager of UP's Heritage Operations. Dickens and his team are currently rebuilding The Living Legend No. 844 locomotive.

"The boilers on these locomotives are very, very well built, but there are still a lot of consumable parts," Dickens said. "They're exposed to the fire, water and fuel the locomotive burns, so you can imagine how these combined elements affect the steel over time. Every rugged machine requires heavy maintenance as part of its life cycle, and the process is specified by regulation. Right now we’re performing a comprehensive inspection to assess the overall condition.”

The first step was removing some of the boiler's internal components, allowing for members of the UP Steam Team to crawl inside with ultrasonic measuring equipment.

“The ultrasonic tester uses sound waves to penetrate various parts of the boiler to measure material thickness," Dickens said. "We had thousands of points to measure. We plug all the measurements into mathematical formulas to determine if the boiler still meets required specifications.”

To bring it up to spec, precise adjustments were needed on some parts. For example, two boiler braces had to be shortened by 0.060 inch. To make the adjustment, the parts had to be removed from the inside of the boiler, which required the removal of other components. "We have to take nearly everything apart," Dickens said. “Often, we have to make special fixtures to hold heavy components to make such precise adjustments.” 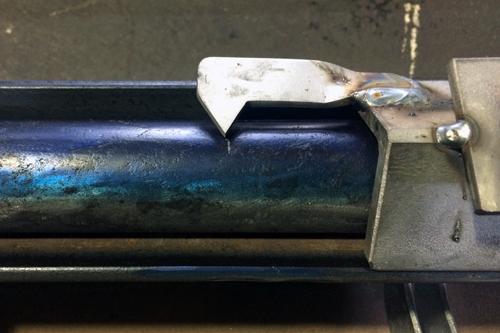 One of the two boiler braces as it's being shortened.

The team analyzed all aspects of the boiler, both inside and out including the fire box, which needed patching due to corrosion that occurred behind the firebrick. "We also had to determine if small portions of the firebox sheets are thick enough to operate for many more years of service," Dickens said.

With the analysis stage completed, the Steam Team is now in the process of putting the boiler back together. So far they've replaced more than 100 boiler studs – similar to bolts -- that are threaded into the boiler shell. "Most of the existing bolts were worn out, old and rusty," Dickens said. "We removed them, carefully cleaned up each hole with a newly made boiler-tap, and hand made a custom stud from that boiler-tap to fit in those old locations.” 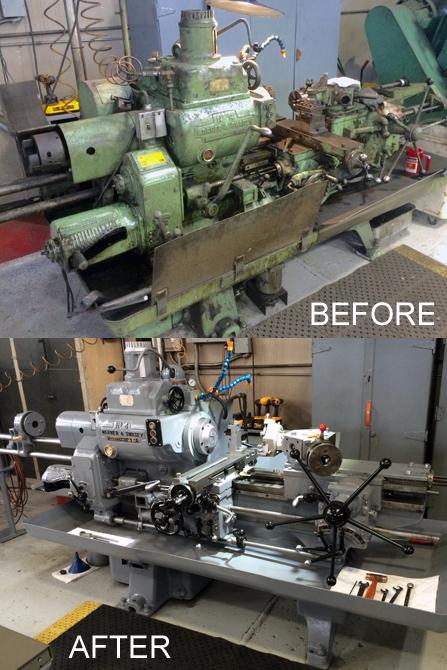 A turret lathe is a steam-era manual lathe used for production work. It has a heavy turret with various tools mounted that can be rotated to perform several operations. Over the past 20 years, the machine was infrequently used because it needed many repairs. To fix the machine, the Steam Team made and installed new parts. The machine will now aid them in maintaining accuracy and dimension variation throughout the assembly process.

"The equipment and tools that we need just aren’t available anymore, and are as old as the locomotives," he said, "Many are left over from the steam era, and they need just as much TLC as the locomotives do. It’s exciting and interesting to get these older machines rebuilt."

“Once we complete all aspects of the firebox work, we will put the new cab deck and the actual cab on,” Dickens said. “We’ll also assemble new steam and air piping, along with the other parts we’ll need to perform a hydrostatic test.”

To perform a hydrostatic test, the team will fill the locomotive with warm water and hydraulically pressurize the boiler. This test will certify that the new welded patches and hand-constructed components can withstand the required amount of pressure.

“Once the hydrostatic test is done, we’ll begin the reassembly process, followed by a steam test, before final reassembly occurs,” Dickens said.

“I’m really excited to get into the cab work,” Barker said. “That’s when the fun part begins. Our team eats, sleeps and breathes this stuff. We’re always looking at old pictures of when they were putting these locomotives together. It’s going to look just like it did when the American Locomotive Company built it in 1944, right here in our shop. It’s going to look excellent, just exquisite.”