With Testing Under Way, No. 844 Prepares for Frontier Days Debut 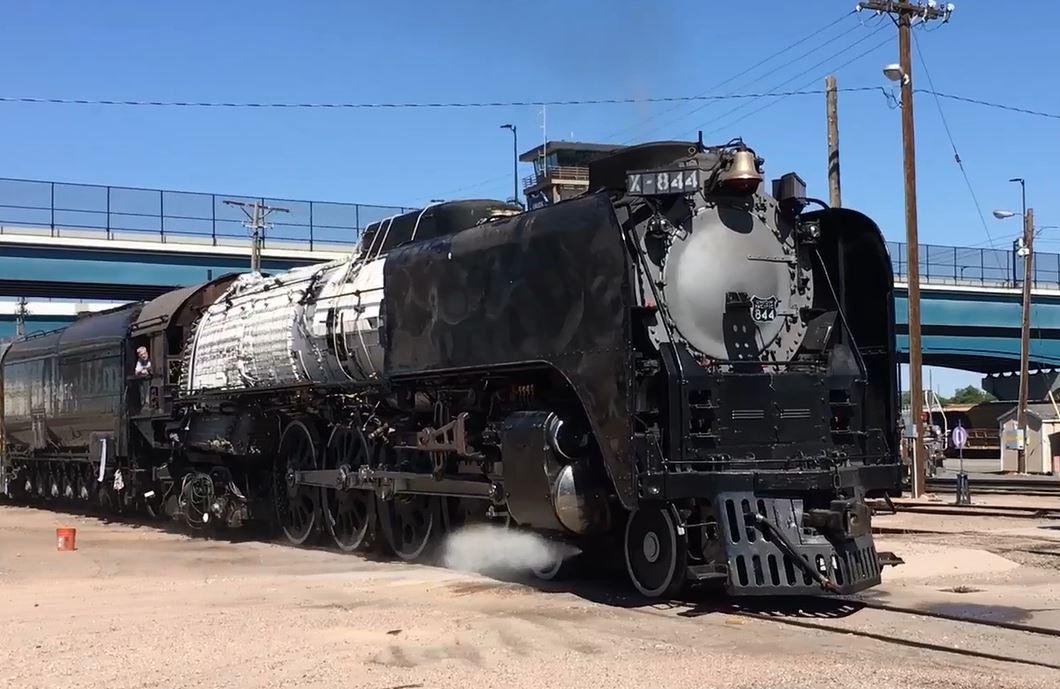 Locomotive No. 844 undergoes a steam test in preparation for the Cheyenne Frontier Days Denver Post Special, which runs from Denver to Cheyenne.

UP’s Living Legend No. 844 continues to pass its exams as it readies for its big return to service at Cheyenne Frontier Days July 23. No. 844’s engine was successfully test fired June 16, and a full steam test was completed on June 17.

Ed Dickens, Union Pacific’s senior manager – Heritage Operations, said the locomotive reassembly is nearing completion. “We’ve gone from a boiler to an operating locomotive in a matter of weeks.”

With a successful hydrostatic inspection of No. 844 under their belt, the team confirmed the unit’s pressure vessel is sound. “There were no issues with the hydrostatic inspection,” Dickens said. “The inspectors present were very pleased with the professionalism and craftsmanship exhibited by the staff. It was a nice end to that part of the work.”

The team has moved on to testing No. 844 with steam. When the locomotive reached full pressure, Jimmy Thompson, boiler maker, was the first person to blow the whistle. “The whistle came to life,” Dickens said. “And at that moment the City of Cheyenne could hear – No. 844 is back.”

No. 844 Prepares for Frontier Days Debut

The Union Pacific Steam Team tests locomotive No. 844 outside the Steam Shop in Cheyenne, Wyoming.

The steam test allowed the team to further evaluate the boiler, including all the newly fabricated piping. No. 844 completed all tasks with flying colors.

“I just can’t say enough about the workmanship of this crew and their determination,” Dickens said, adding that No. 844 is ready to impress fans old and new. “It’s a work of art. I get goose bumps – it’s really neat. When you see it, you’ll know what I mean.”

When the crew returns from the Cheyenne Frontier Days Denver Post Special, which runs from Denver to Cheyenne, they will immediately begin work rebuilding the Big Boy, locomotive No. 4014.

“We’ve already got our plans afoot,” Dickens said. “We’re chomping at the bit to get to work on No. 4014. All the neat tools and cool stuff we’ve built will apply to the 4014 project, so you’re going to see huge progress on that Big Boy.”