Locomotives 951, 949 and 963B are the last of Union Pacific's high-speed diesel-electrics built for service on the famous streamliner and domeliner passenger trains. The 2000 horsepower locomotives were built for the Union Pacific Railroad by the Electro-Motive Division (EMD) of General Motors and delivered in June 1955. 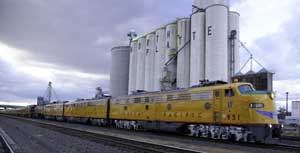