Although diesel locomotives first came to American railroads in the 1920s, their use was confined to switch engines, and later to passenger train locomotives. It wasn't until 1940 that the Electro Motive Division of General Motors (EMD) demonstrated that diesels could practically replace steam locomotives in heavy-duty service. A pioneer freight diesel, model "FT," toured the nation's railroads and changed history. Much like its sister passenger locomotives of the day, it was styled with an automobile-like nose and windshield, a design that prevailed until the late 1950s.

Although commonly called "diesels," the locomotives actually are electrically driven. The diesel engine drives an alternator, which produces electricity to run electric motors mounted on the locomotive's axles. The internal combustion engine was a dramatic improvement in efficiency over the steam locomotive, making substantial savings possible in maintenance and the elimination of widespread facilities. Extra units could be coupled together and run by one engineer from the lead unit, creating very powerful combinations.

Many railroads, including Union Pacific, were unable to take quick advantage of the new technology due to material shortages caused by World War II. Union Pacific's fleet of modern steam locomotives and plentiful on-line coal reserves in Wyoming were another factor in UP's late entry into the dieselization race. After the war however, railroads began sweeping the rails clear of the classic steamers. Union Pacific began its sweep in the late 1940s on the line running through the southwestern deserts, where water was difficult to obtain for steam engines.

By the end of the 1950s the steam era was over and increasingly powerful diesels ruled the rails. 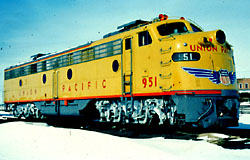 Union Pacific has restored three E-9 passenger locomotives: No. 951, 949 and 963B. They are used in special train service. The first of the set, 951, was returned to the roster in 1984 after having been retired in 1980 to substitute for steam engine No. 844 on the annual "River City Roundup" train because the steam engine was on display that year at the New Orleans World's Fair.

No. 951 was one of 69 E-9 locomotives once owned by Union Pacific. Built in 1955, it pulled such famous trains as the City of Los Angeles, City of Portland, City of San Francisco, City of St. Louis and the Challenger. When Amtrak took over most of the nation's rail passenger service in 1971, No. 951 was one of eight units retained by UP for special service. The rest of the E units were sold or transferred to Amtrak.

In 1974 No. 951 was loaned to the sponsors of the American Freedom Train to promote the AFT's bicentennial tour. The locomotive was repainted with a red, white and blue bicentennial paint scheme and toured much of the nation pulling the "Preamble Express" in advance of the widely publicized steam-powered Freedom Train tours in 1975 and 1976. The locomotive was returned to UP after the tour and repainted to its traditional yellow in 1978.

No. 951, along with 949 and 963B, which were reacquired by UP in order to handle bigger trains, was rebuilt with modern components in 1993, although its outward appearance continued to retain the look of the 1955 era. The vital statistics can be found on the Streamliner page. Also, be sure to check out the E-9 Photo Gallery. 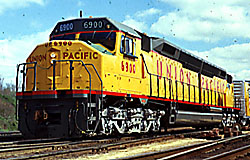 Union Pacific has retained only one of its 47 Centennial diesel-electric locomotives, No. 6936. The Centennials were the largest diesel-electric locomotives ever built. Actually comprising two engines on one frame, they delivered 6,600 horsepower. Designed and built exclusively for Union Pacific Railroad, the units were named in honor of the railroad's centennial anniversary celebration in 1969. Accordingly, they were numbered in the 6900 series, from 6900 to 6946.

The first Centennial was delivered in 1969, in time to participate in the Golden Spike celebration in Utah. The remaining units were delivered during the next two years. They operated in fast freight service over most of the UP system until their retirement in 1984. Thirteen of the locomotives were donated for public display in various parks and museums.

Union Pacific has retained several other diesel-electric locomotives for preservation and possible restoration. In storage in Cheyenne is a Chicago and North Western "F" unit, the F7A CNW 401, the E-9B unit UP 966B, former Denver & Rio Grande F "B" unit DRGW 5763.

In use as the "shop switcher" at the Cheyenne heritage complex is the UPY1072 SW1500.