The Missouri-Kansas-Texas Railroad, affectionately referred to as the Katy, was created in 1865. By the time it joined Union Pacific in 1988, the Katy served six midwestern states with more than 3,377 miles of track. It was an important north-south link between the Midwest and Texas, especially for the growing coal business. The Katy had primary operating centers in Denison, Texas; Bellmead, Texas; and Parsons, Kan.; and was headquartered in Dallas.

The new Katy Heritage Series locomotive is numbered 1988 to reflect the year its namesake joined Union Pacific, and the locomotive will initially operate within territory served by the Katy. The Katy locomotive was unveiled Sept. 20, 2005. 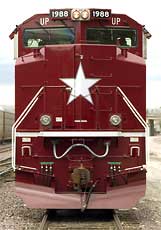