It may have been the discovery of gold in California in 1848 that ignited in the American people the urgent need for more rapid and dependable transportation facilities in the West. Missouri and the West needed railroads, and St. Louisans visualized a railroad all the way to the Pacific Ocean with that railroad starting from their city.

Leaders of St. Louis secured a Missouri charter in 1849 for the Pacific Railroad to extend "from St. Louis to the western boundary of Missouri and thence to the Pacific Ocean." The "ground breaking celebration" was held on the July 4, 1851.

About 1873 a New York financier, Jay Gould, became interested in western railroads when he acquired a large block of stock in the Union Pacific Railroad. Subsequently, he purchased control of the Kansas Pacific, the Denver Pacific and the Central Pacific. Gould noted the westward expansion policy of the new Missouri Pacific Railway as a threat to his Union Pacific, and in 1879 he bought a controlling interest in the company and became its president.

When designing the locomotive, the creative team concentrated on two particular time periods: the 1940s, when Mo-Pac introduced a blue, gray and white color scheme with a thin yellow accent stripe, and the 1960s, when the paint scheme was altered to a solid dark blue with the MP buzz saw logo.

The result for the MoPac heritage locomotive was a two-tone blue and white color scheme that harkens back to the streamliner days and combines the buzz saw logo and screaming eagle graphic introduced in the 1960s. The design implies both power and speed.

The Missouri Pacific Heritage locomotive was unveiled in Omaha, Neb., on July 30, 2005. 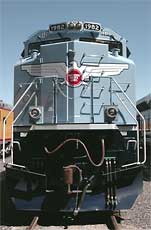