Founded by Gen. William J. Palmer, a Union veteran of the Civil War, the Rio Grande started building a narrow gauge line south from Denver in 1871 toward Mexico. At its peak mileage in 1917, the Rio Grande was operating nearly 6,000 miles of track.

On-line coal, bridge traffic with friendly connections, and the opening of the 6.2-mile Moffat Tunnel in 1928 that dramatically shortened its Denver-Salt Lake Route, the Rio Grande became known for its competitive spirit and mountain scenery.

The "Grand Canyon of the Arkansas River," known as the Royal Gorge, was one of the highlights on the route through the Rockies when The Denver & Rio Grande was known as the Scenic Line of the World.

Incorporating historic colors and graphic elements of the Denver & Rio Grande Western Railroad, the heritage locomotive unveiled in June 2006 pays tribute to the men and women of the railroad who "went everywhere the hard way." 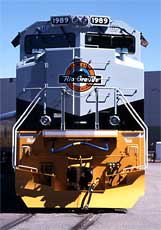