From 1910 until merging with Union Pacific Railroad in 1982, the Western Pacific was one of the West's most popular railroads. Attracting fans from all over the world, the WP's short but diverse route featured everything from urban industrial trackage in the thriving metropolis of the San Francisco Bay area to the scenic splendors and sleepy mountain communities of the famous Feather River Route and on through the desert wastelands of Eastern Nevada and Utah.

In 1949, Western Pacific joined with the Denver & Rio Grande Western and the Chicago, Burlington & Quincy railroads to introduce a new streamlined passenger train between Oakland and Chicago, the "California Zephyr." The cars on the Zephyr were exchanged between the three railroads, but each used its locomotives on its own portion of the trip. The WP introduced an orange and silver paint scheme with an elaborate, stylized red nose feather to decorate its new passenger locomotives.

In 1970, a solid green paint scheme with orange lettering was introduced, followed by the addition of an orange nose in 1979, the final WP color scheme.

The company struggled financially through most of its existence due to the lack of feeder branch lines and competition from Southern Pacific and the Atchison, Topeka & Santa Fe Railway for transcontinental traffic. WP was acquired by Union Pacific on Dec. 22, 1982.

The heritage locomotive was unveiled in Omaha, Neb., in July 2005. 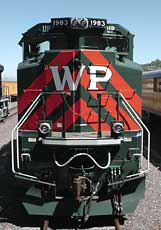