The Last of the Steam Locomotives

Steam Locomotive No. 844 is the last steam locomotive built for Union Pacific Railroad. It was delivered in 1944. A high-speed passenger engine, it pulled such widely known trains as the Overland Limited, Los Angeles Limited, Portland Rose and Challenger.

Many people know the engine as the No. 8444, since an extra '4' was added to its number in 1962 to distinguish it from a diesel numbered in the 800 series. The steam engine regained its rightful number in June 1989, after the diesel was retired.

When diesels took over all of the passenger train duties, No. 844 was placed in freight service in Nebraska between 1957 and 1959. It was saved from being scrapped in 1960 and held for special service.

The engine has run hundreds of thousands of miles as Union Pacific's ambassador of goodwill. It has made appearances at Expo '74 in Spokane, the 1981 opening of the California State Railroad Museum in Sacramento, the 1984 World's Fair in New Orleans and the 50th Anniversary Celebration of Los Angeles Union Station in 1989.

Hailed as Union Pacific's "Living Legend," the engine is widely known among railroad enthusiasts for its excursion runs, especially over Union Pacific's fabled crossing of Sherman Hill between Cheyenne and Laramie, Wyoming.

The Northern class steam locomotives, with a wheel arrangement of 4-8-4, were used by most large U.S. railroads in dual passenger and freight service. Union Pacific operated 45 Northerns, built in three classes, which were delivered between 1937 and 1944. Initially the speedy locomotives, capable of exceeding 100 miles per hour, were assigned to passenger trains, including the famous Overland Limited, Portland Rose and Pacific Limited. In their later years, as diesels were assigned to the passenger trains, the Northerns were reassigned to freight service. They operated over most of UP's system.

The second series of Northerns was more than 114 feet long and weighed nearly 910,000 pounds. Most of them were equipped with distinctive smoke deflectors, sometimes called "elephant ears," on the front of the boiler. These were designed to help lift the smoke above the engine so the engine crew's visibility wasn't impaired when the train was drifting at light throttle.

The last steam locomotive built for Union Pacific was Northern No. 844. It was saved in 1960 for excursion and public relations service, an assignment that continues to this day. Any current excursions scheduled are posted on the Schedule page. Two other Northerns are on public display: No. 814 in Council Bluffs, Iowa and No. 833 in Ogden, Utah. A third Northern, No. 838, is stored in Cheyenne and is used as a parts source for No. 844. 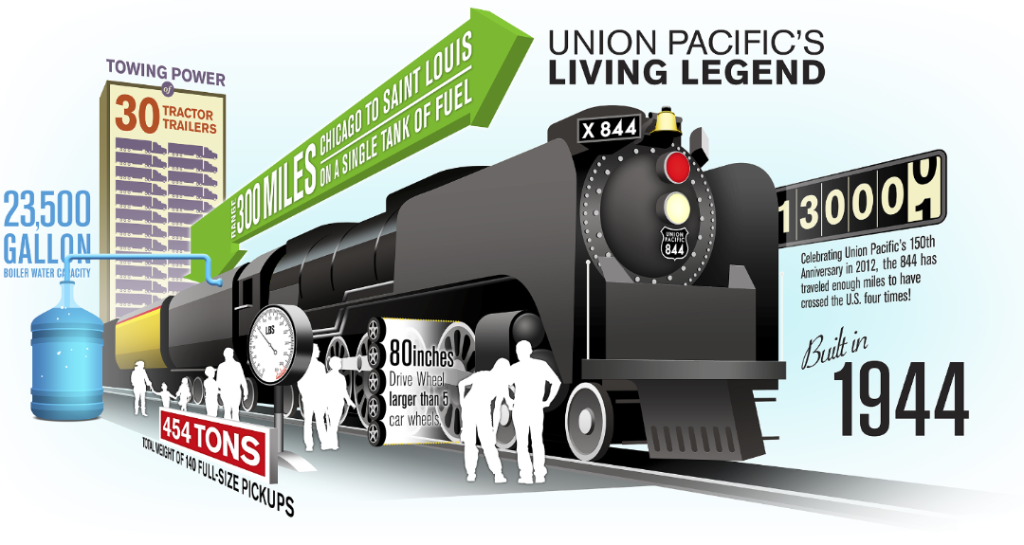