Union Pacific is committed to implementing Positive Train Control (PTC) carefully and thoroughly to enhance safety for employees and communities. Through Dec. 31, 2018, we've invested $2.8 billion in PTC, and we plan to spend $115 million in 2019. Our current estimate for PTC's total cost is about $2.9 billion.

Positive Train Control (PTC) is an advanced system designed to automatically stop a train before certain accidents occur. In particular, PTC is designed to prevent:

PTC does not prevent vehicle-train accidents at railroad crossings, or those due to track and equipment failures. 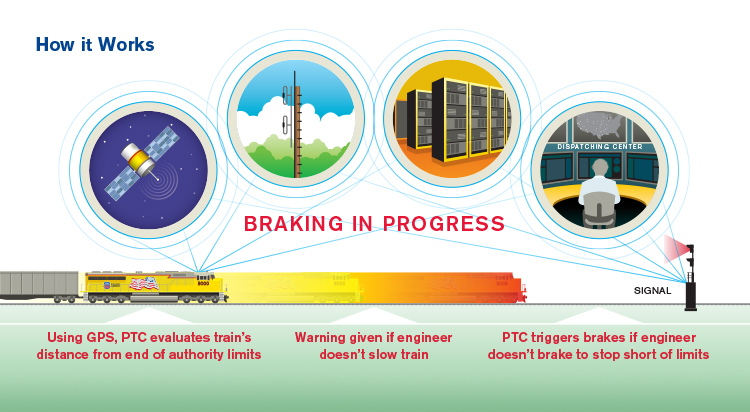 When fully deployed, the nationwide PTC system will accurately determine a train's location, direction and speed via the following process:

Union Pacific is proud of its employees involved in this unprecedented undertaking, as they work tirelessly to safely implement and integrate this new technology.

What PTC Does and Does Not Do

Why PTC is so Complex

Implementing PTC properly requires integrating thousands of components across the telecommunications spectrum, such as GPS, Wi-Fi, radios, cellular technology, antennae, base stations and first-of-its-kind software that decides when to slow or stop a train – across Union Pacific’s network.

PTC must be "interoperable" – passenger, commuter and freight trains must be able to seamlessly communicate and operate across all railroad systems. Any breakdown in interoperability presents unacceptable risks to the safety and efficiency of America's rail network. Additionally, the Federal Railroad Administration (FRA) must review each railroad's PTC safety plan and certify the PTC system after development and testing of components is completed. This certification is mandatory before PTC-controlled trains can go into service.

About 40 railroads are developing and installing PTC systems around the country. As the architecture of this system comes together, Union Pacific employees and contractors are working full-time against a planned $2.9 billion investment in PTC.

The Rail Safety Improvement Act of 2008 (RSIA) requires railroads to install PTC systems on tracks that carry passengers or poison- or toxic-by-inhalation (TIH) materials. Based on a January 2012 final Federal Railroad Administration (FRA) rule, the Association of American Railroads (AAR) estimates that PTC technology will be deployed on about 63,000 miles of U.S. freight rail lines. As originally written, the RSIA mandated that PTC be put into service by the end of 2015. Recognizing the challenges of this new technology, in December 2015 Congress extended the PTC implementation deadline to Dec. 31, 2018.