Union Pacific is finding ways to improve the technology used to move our trains and run our operations, resulting in improved environmental performance.

Union Pacific researched and collaborated with locomotive manufacturers for years to prepare for the EPA’s stringent Tier 4 emissions standards that took effect in 2015.  Union Pacific has acquired several hundred of these road locomotives and partnered with two California air districts to repower 10 low horsepower diesel-electric locomotives into new EPA Tier 4 switchers. Tier 4 standards reduce particulate emissions from diesel locomotives by as much as 90 percent and nitrogen oxide emissions by as much as 80 percent.

Distributed power units (DPU) are locomotives that operate in the middle and/or end of trains rather than only having all locomotives at the front end. Distributed Power technology carries fuel and safety benefits – a win-win for Union Pacific and the communities where Union Pacific operates. As a result, Union Pacific moves a majority of its gross ton miles using the technology.

For safety, distributed power reduces the physical forces on the train, making it less prone to derailments and facilitates more even braking to reduce wheel and track wear. Distributed power also provides a fuel savings of 4-6 percent compared to standard locomotive power, depending upon the route and topography, reducing emissions. 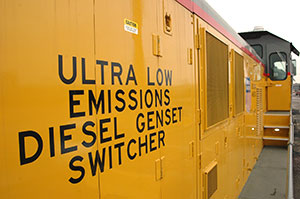 The Genset locomotive is an engine that, by using multiple smaller diesel engines and generators instead of one large single engine, can achieve a better emissions profile than a conventional locomotive. Union Pacific created and pioneered Genset locomotive technology. Gensets served as a bridge technology to reduce emissions, although reliability and maintenance challenges prevented their greater adoption.

Compared to conventional diesel locomotives, Gensets reduce greenhouse gas emissions by as much as 37 percent, emissions of oxides of nitrogen by up to 80 percent, and emissions of particulate matter by 90 percent. Gensets use only as many engines as necessary. Some rail yard work might demand the power of all engines, but many other tasks may require less power. Running fewer engines translates to burning less fuel and fewer emissions. As a result of the Genset’s environmental benefits, the California Air Resources Board designated them as "ultra-low-emitting locomotives."

A retrofitted Genset also included the addition of diesel particulate filters (DPF) in California to evaluate the DPF’s viability to meet operational requirements as well as Tier 4 standards for particulate matter, carbon monoxide, and hydrocarbons.  In 2015, Union Pacific introduced the first Gensets certified to Tier 4 standards in Dolton IL, a Chicago suburb.

Exploring new technologies is a hallmark that Union Pacific has pursued for decades. This focus on research and development serves as a catalyst for greater reductions in emissions.

Since 2009, Union Pacific has spent about $3.4 billion to purchase approximately 1,300 fuel-efficient locomotives.

Technology supports train crews to drive fuel efficiency across the system. Trip Optimizer® and LEADER® are energy management systems that work like cruise control. They automatically control a locomotive’s throttle and dynamic brake to reduce fuel usage, minimize GHG emissions and optimize train handling. The systems calculate the most efficient way of operating a train by considering such factors as train length, weight, grade, track conditions and locomotive performance.

Advanced experimental locomotives are testing three emissions-reducing technologies including exhaust gas recirculation (EGR), diesel oxidation catalysts (DOC), and diesel particulate filters (DPF) in intermediate-length hauls of approximately 200 miles. UP 9900 was the signature unit in a series of 25 locomotives that Union Pacific analyzed as part of a broad test of various emissions-reduction techniques in northern and southern California. A reduced freight locomotive engine size in UP 9900 created space needed to install EGR, DOC, and DPF. Known as "aftertreatment," all three technologies were used simultaneously and helped further pursue developing a locomotive that meets the U.S. EPA's Tier 4 emission standard.

Union Pacific has evaluated alternative fuels for more than half a century including biodiesel, propane, liquefied natural gas and hydrogen. The company is actively employing increased biodiesel blends and introduction of a battery-electric locomotive.

Union Pacific conducted extensive gas turbine tests as far back as 1952. While diesel consistently comes out as the fuel to most efficiently and effectively power Union Pacific's network, we anticipate a combination of fuels and technologies will power tomorrow's railroad. Union Pacific once again studied the benefits of converting locomotive engines to dual diesel & LNG fuel in the mid 2010s, working closely with locomotive and engine manufacturers, cryogenic fuel tank suppliers and natural gas/LNG suppliers to complete our analysis. That work confirmed that dual fuel locomotives are not yet viable for usage across the network.