The Race to Promontory: The Transcontinental Railroad and the American West

This release was originally published by Joslyn Art Museum.

Union Pacific, in partnership with Joslyn Art Museum and the Union Pacific Museum in Council Bluffs, Iowa, announces a new travelling exhibition in recognition of the 150th anniversary of the completion of the transcontinental railroad. The Race to Promontory: The Transcontinental Railroad and the American West celebrates the “Meeting of the Rails” at Promontory Summit, Utah, on May 10, 1869, through the photographs and stereographs of Andrew Joseph Russell (1830 – 1902) and Alfred A. Hart (1816 – 1908). Drawn exclusively from the Union Pacific Historic Collection, located at the Union Pacific Railroad Museum, these images represent the largest collection in the world of original photographs documenting the construction of the transcontinental railroad between 1866 and 1869.

Appropriately, this transformative endeavor was captured by the equally groundbreaking medium of photography, which was used to document the railroad’s arduous construction and then capture the moment of its completion and distribute it around the world. From east to west, the Union Pacific line was photographed by Russell, and west to east by Hart, for the Central Pacific. The Race to Promontory features 50 framed Imperial plate albumen prints by Russell, including images from his album, The Great West Illustrated, as well as rare, unpublished prints from the Union Pacific Collection, including Russell’s famous image from Promontory Summit, East and West Shaking Hands. One hundred eight stereograph cards by Hart will also be displayed, and two stereograph viewers will allow museum visitors to view Hart and Russell images in three dimensions.

In the decade following the Civil War, Russell and Hart benefitted from an unprecedented wave of government and corporate patronage that supported a legion of photographers working in the American West. And while no endeavor caught the nation’s interest more readily than the construction of the transcontinental railroad, their images also helped to define the unfamiliar landscapes beyond the Missouri River, capturing not only the engineering triumphs of the railroad, but the vast resources available for an expanding nation, as well as its pictorial beauty. Russell and Hart’s photographs offer an extraordinary account of the United States at the moment of its transformation by the greatest industrial accomplishment of the nineteenth century, images that still resonate powerfully a century and a half after their making.

Highlighting the Joslyn installation will be the three original ceremonial railroad spikes that were presented during the festivities at Promontory Summit on May 10, 1869. Reunited for the first time in 150 years, the Gold Spike, the Silver Spike, and the Arizona Spike were given to railroad officials to celebrate the laying of the last rail and have not been displayed together since that day. Two of the spikes, the Gold Spike and the Silver Spike, are in the collection of the Cantor Museum at Stanford University, and the Arizona Spike is part of the collections of the Museum of the City of New York. This spike has been on display since 2003, at the Union Pacific Railroad Museum in Council Bluffs, Iowa. The exhibition will also include archival material from the Union Pacific Collection including commemorative objects relating to the events at Promontory Summit, as well as artifacts and records from the construction of the railroad

Joslyn Art Museum Director and CEO Jack F. Becker commented, “We are very pleased to be working with our partners at Union Pacific, and with the Union Pacific Museum, to present these historic images by two pioneers of American photography and make them available to audiences across the country. Union Pacific is not only an important part of our community, but the railroad is an integral part of our national story, and we are certain people will be entranced by the work of Russell and Hart and the story of the transcontinental railroad.”

Scott Moore, Union Pacific senior vice president of Corporate Relations and chief administrative officer, said, “The transcontinental railroad formed our nation’s backbone, building communities along the way and uniting our nation. Union Pacific continues to be at the forefront of innovation, using technology to make meaningful change in every aspect of our business, enabling us to deliver the goods Americans use every day and help build safe, vibrant and prosperous communities in the 23 states where our employees live and work. The Race to Promontory exhibit underscores this connection and recognizes our responsibility to share our history with the American people.”

The completion of the transcontinental railroad was as celebrated a national – and international – event as the first moon landing, exactly a century later in 1969. Forty-six months after they began construction, the two railroads came together and officially "united" the United States. Western Union offered coverage direct from the scene – the first major news event carried "live" from coast-to-coast.

Telegraph wires were attached to one of the ceremonial spikes and as it was gently tapped with a silver maul, the “strokes” were heard across the Country. Whistles were blown in San Francisco, the Liberty Bell was rung in Philadelphia, and a ball was held in Washington, D.C.

The transcontinental had opened the heart of the continent, and, within days of its completion, the country was transformed. Travel from New York to San Francisco was reduced from six months to 10 days, and at ten percent of the cost. This new era witnessed the development of settlements for millions of Americans and an incredible surge in industrial growth. Agricultural products were transported east from California, changing how Americans filled their dinner tables. The railroad led to the creation of Standard Time, to allow trains to move safely along a single track. Communication flowed quickly and reliably across the country on mail cars and by telegraph lines along the track. The railroad also connected the United States to the world, carrying products from Asia and Europe – the first freight shipment across the new railroad included casks of tea from Japan – and building new markets for both imported and exported goods.

On a larger scale, the railroad also obliterated the idea of the “frontier,” and forever changed the lives of indigenous Plains tribes, as new migration spurred by the railroad hastened the end of the Indian Wars and the beginning of the reservation era. The Pacific Railway and Homestead Act insured the resettlement of new territories under the control of the federal government, reinforcing the 19th century ideal of Manifest Destiny as the United States expanded from sea to sea.

Our Mission — Joslyn Art Museum collects, preserves, and interprets the visual arts of the highest quality, fostering appreciation and enjoyment of art for the benefit of a diverse audience.
Our Vision — To be cherished and respected as a premier art museum.

Joslyn Art Museum showcases art from ancient times to the present. The Museum was a gift to the people of Omaha from Sarah Joslyn in memory of her husband, George, who made his fortune as president of the Western Newspaper Union. The Museum’s original 1931 building is one of the finest examples of Art Deco architecture in the nation, with 38 types of marble from seven countries. The Walter and Suzanne Scott Pavilion, a 58,000-square-foot addition built in 1994, was designed by renowned British architect Norman Foster as his first U.S. commission. The Museum features galleries, a 1,000–seat concert hall, fountain court, education technology gallery, lecture hall, classrooms, sculpture garden, café, shop, and Art Works, an interactive space for art exploration.

Union Pacific Railroad is the principal operating company of Union Pacific Corporation (NYSE: UNP). One of America's most recognized companies, Union Pacific Railroad connects 23 states in the western two-thirds of the country by rail, providing a critical link in the global supply chain. In the last 10 years, 2008-2017, Union Pacific invested approximately $34 billion in its network and operations to support America's transportation infrastructure. The railroad's diversified business mix is classified into its Agricultural Products, Energy, and Industrial and Premium business groups. Union Pacific serves many of the fastest-growing U.S. population centers, operates from all major West Coast and Gulf Coast ports to eastern gateways, connects with Canada's rail systems and is the only railroad serving all six major Mexico gateways. Union Pacific provides value to its roughly 10,000 customers by delivering products in a safe, reliable, fuel-efficient and environmentally responsible manner.

The Union Pacific Railroad Museum, operated by the Union Pacific Museum Association, a nonprofit 501(c) 3, is housed in a historic Carnegie Library building in Council Bluffs, Iowa, where visitors will discover an extensive compilation of artifacts, photographs, documents and equipment from more than 150 years of our nation's most ambitious endeavors – including constructing the transcontinental railroad and settling the West. Among the most popular museum exhibits are "America Travels by Rail," which celebrates the height of passenger travel; the Lincoln Collection, featuring artifacts from President Abraham Lincoln's rail car and funeral; and “Working on the Railroad,” an exhibit that features the technology and innovation that sustain Union Pacific as a railroad industry leader. The Union Pacific Railroad Museum’s mission is to promote a sense of connectedness that’s shared by generations of people whose personal and family histories have been touched by the railroad. 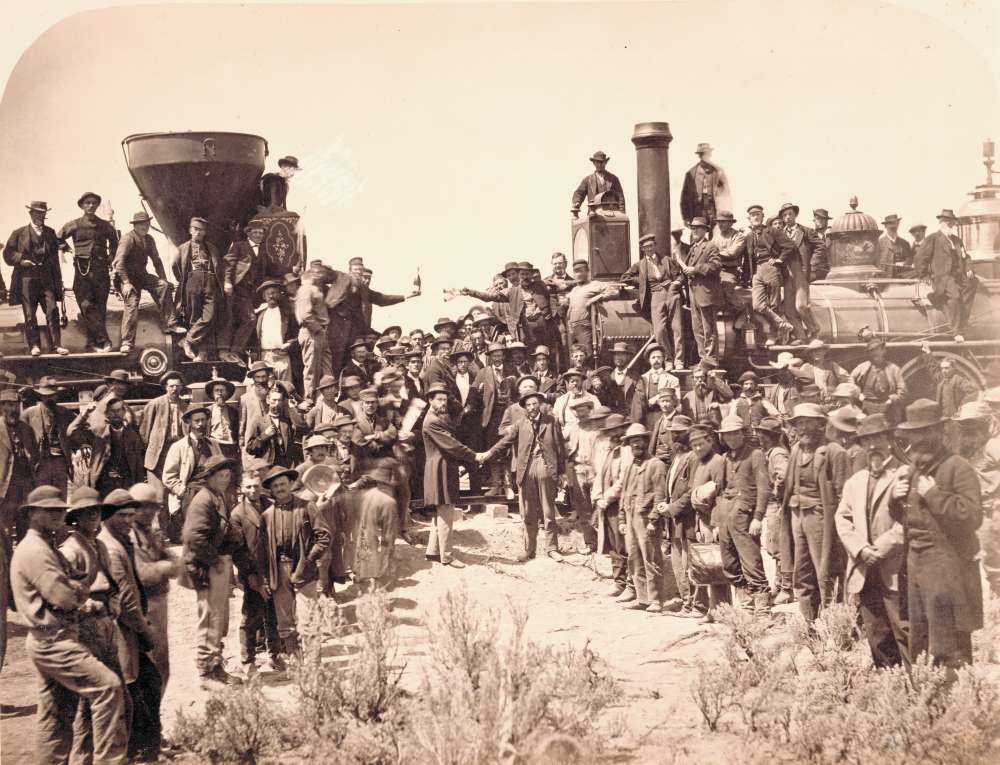