The world's largest steam locomotive, Union Pacific's Big Boy No. 4014, will embark on a third and final tour celebrating the 150th anniversary of the transcontinental railroad's completion, giving rail fans across the Southwest an opportunity to experience history. The newly restored locomotive recently completed a tour across the upper Midwest and a trip to Ogden, Utah, for a May 9 ceremony commemorating the anniversary.

No. 4014 will leave the Steam Shop in Cheyenne, Wyoming, Sept. 27 for the "Great Race Across the Southwest," making brief whistle-stops in communities along its route through Arizona, Arkansas, California, Colorado, Kansas, Missouri, Nevada, New Mexico, Oklahoma, Texas, Utah and Wyoming. At this time, only the October tour dates are available; however, the full schedule is expected to be released at upsteam.com prior to the Sept. 27 tour launch. No. 4014 will be on display in the following cities:

"Weighing in at 1.2 million pounds, the Big Boy makes a big impression in communities it visits, reminding us of bygone days and the important role the railroad continues to play in our global economy," said Scott Moore, senior vice president – Corporate Relations and chief administrative officer. "Union Pacific wants to thank the countless rail fans and communities who have helped us celebrate this tremendous anniversary."

Twenty-five Big Boys were built exclusively for Union Pacific, the first of which was delivered in 1941 to handle the steep terrain between Cheyenne and Ogden. Of the eight still in existence, No. 4014 is the world's only operating Big Boy. In May, it completed its inaugural tour to Ogden for Union Pacific's 150th anniversary ceremony. The Big Boy and historic steam locomotive Living Legend No. 844 met nose-to-nose, recreating the iconic image taken May 10, 1869, when the last spike was tapped into place at Promontory Summit, creating America's first transcontinental railroad.

The Experience the Union Pacific Rail Car, a new, multi-media walk-through exhibition providing a glimpse at the past while telling the story of modern-day railroading, will accompany the Big Boy on its tour. A route map and No. 4014's GPS location tracking information is available at upsteam.com. Due to the dynamic nature of these operations, running times and scheduled stops are subject to change. 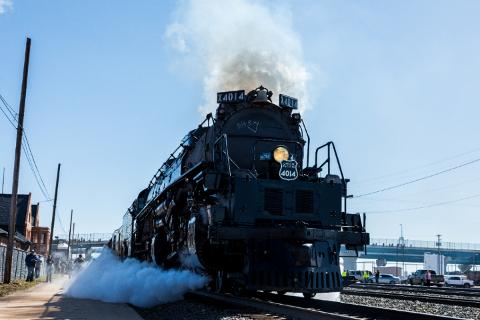 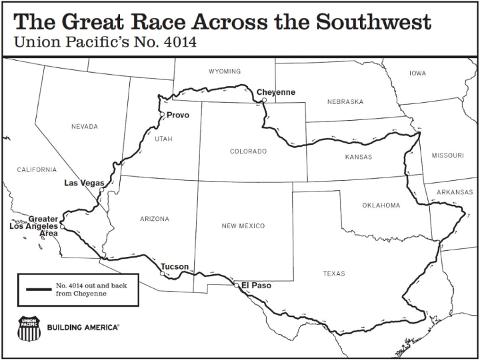 Map of "The Great Race Across the Southwest"