"Railroad crossing incidents involving drivers and pedestrians are preventable if people remain vigilant near the tracks and avoid risky behavior,” said Erin Batt, Union Pacific's chief safety officer. "Rail Safety Week is a great opportunity for communities to raise awareness about how people can keep themselves and their families safe near rail lines.”

Trains hit a person or vehicle at railroad crossings every four hours in America, according to the U.S. Department of Transportation and the Federal Railroad Administration. Union Pacific hopes to reverse the trend by discouraging unsafe behavior such as ignoring railroad warnings and walking on tracks in areas that are not designated crossings. Designated crossings can be marked with x-shaped railroad signage or equipped with red flashing lights, bells and gates.

It's important to remember trains do not operate on set schedules and to expect a train at all times. Practicing the following rail safety tips throughout the year will help drivers and pedestrians stay safe near railroad tracks:

More information is available at up.com/safety. 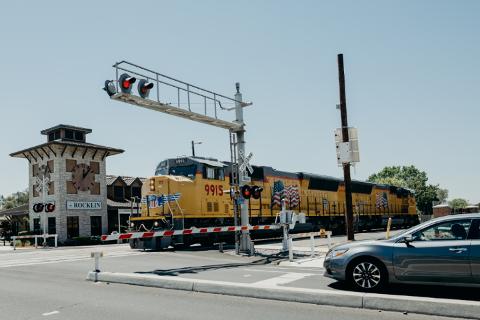