Ceremony Marks Delivery of UP No. 3105

The arrival of the UP No. 3105 locomotive at RailGiants Museum in Pomona, Calif., was a cause of both celebration and ceremony Feb. 22.

Joining the Union Pacific Steam team headed by Ed Dickens was Pomona Mayor Elliott Rothman and Rob Shatsnider of the Southern California Chapter of the Railway and Locomotive Historical Society, the organization that manages RailGiants Museum.

Two ceremonies commemorated the delivery of the donated SD 40-2 locomotive, boxcar and caboose. First was the driving of ceremonial spikes -- including a "golden spike" -- into a tie on the RailGiants' museum track.

Next came the cutting of a steel ribbon. "In the steam locomotive era railroads marked historical moments by cutting a ribbon of steel with a torch," Dickens said. "The honor was usually given to a railroad executive."

In this case, Mayor Rothman did the honors.

As a final gesture, Dickens presented Shatsnider with Union Pacific's bill of sale for the donated train. UP No. 3105 now resides where the Big Boy No. 4014 used to reside in RailGiants Museum. At the request of museum personnel, the UP Steam team rearranged the remaining steam locomotives so they would be more prominently displayed. 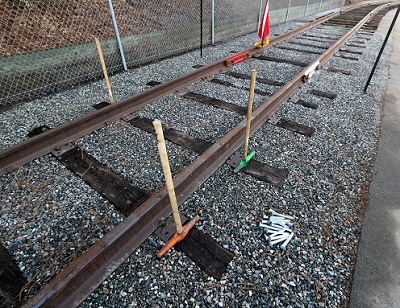 Spike mauls and spikes await the beginning of the spike-driving ceremony. 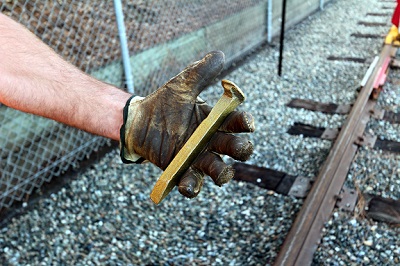 The golden spike was presented by the Southern California Chapter of the Railway and Locomotive Historical Society. 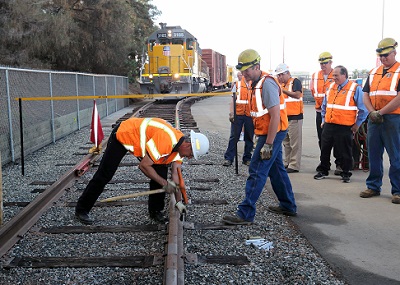 Ed Dickens, left, sets a spike prior to driving it with Machinist Austin Barker. 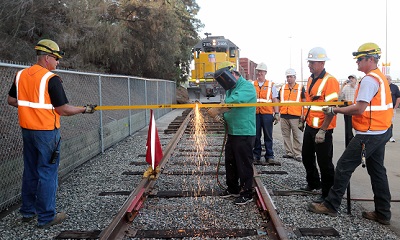 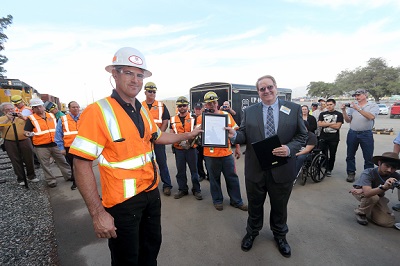 Dickens presents Rob Shatsnider of the Southern California Chapter of the Railway and Locomotive Historical Society with the Union Pacific Bill of Sale for the donated train. 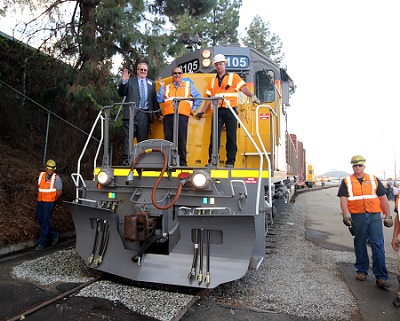 Aboard No. 3105, from left, Rob Shatsnider, Mayor Elliott Rothman and Ed Dickens. 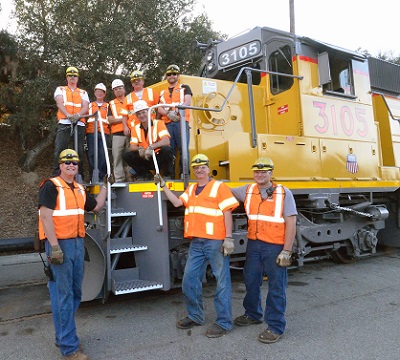 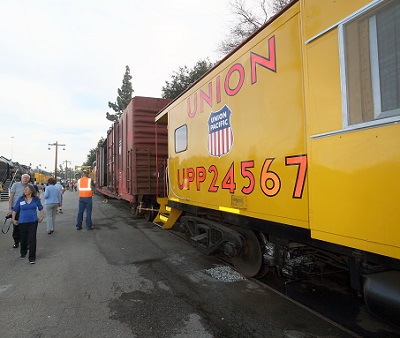 The caboose, boxcar and locomotive finally arrive inside RailGiants Museum.