History Is on Display at Union Pacific's Home Plate

UP No. 951, one of our classic E9 Streamliner locomotives, is on display at Union Pacific's Home Plate across the street from where the NCAA College World Series is being held June 13-24.

A long-standing Omaha tradition, the NCAA College World Series brings together the eight best college baseball teams each June to battle it out in TD Ameritrade Ballpark.

Now in its fourth year, Union Pacific's Home Plate has become a tradition of its own. Located just north of the stadium, baseball fans and rail fans can see history on display in the form of Union Pacific's fleet of Heritage cars, some dating back to 1912, each painstakingly restored.

This year's heritage train is led by No. 951, one of the last of UP's high-speed diesel-electrics built for service on the famous streamliner and domeliner passenger trains. The 2000-horsepower locomotive was built for UP and delivered in June 1955. It's a classic, just like the College World Series.

Union Pacific's Home Plate, located at 12th and Cuming St., is open to the public June 13-24 from noon to 7 p.m. Find out more on the Home Plate page. See you at the game! 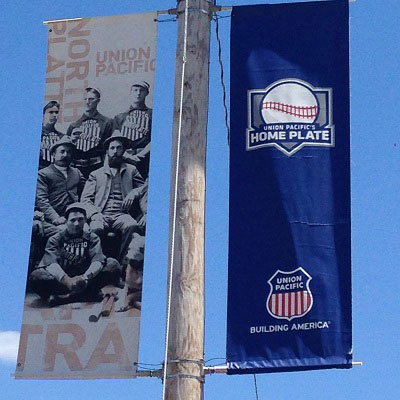