Union Pacific's Big Red Express takes to the rails Saturday, June 28 on a whistle-stop tour through Eastern Nebraska and beyond. The train's precious cargo includes coaches and personnel from University of Nebraska-Lincoln's Husker sports programs.

The westbound train departs at 8 a.m. from Omaha and stops in Columbus, Grand Island, Kearney and North Platte. Pep rallies at each stop will give fans a chance to show their Husker spirit before welcoming coaches and local leaders for a celebration of university athletics and community pride.

"Historically, a whistle-stop tour brought presidents to cities where they could communicate directly with the people they served," said Jim Rose from the Husker Athletic Foundation. "That's exactly what we're doing, meeting people and thanking them for all the support they've shown to University of Nebraska Athletics, year after year and decade after decade. We thought it was a great idea to ride Union Pacific's tradition to help support our own."

Activities at each location will begin a half-hour before the scheduled arrival of the Big Red Express. Once the Big Red Express arrives, coaches and administrators will join the rally onstage for a brief program saluting the Union Pacific-served communities that support the University of Nebraska.

"We are proud to support the University of Nebraska by operating our historic Heritage passenger equipment for the Big Red Express from Omaha — home of our headquarters — to North Platte — home of the world's largest classification rail yard," said Donna Kush, Union Pacific's vice president - Public Affairs, Northern Region. "The Express demonstrates our pride and commitment to communities across the state of Nebraska where 8,000 of our employees live and work every day."

Greg Sharpe, the football and baseball play-by-play “Voice of the Huskers,” will interview several coaches at each stop while other coaches mingle with fans, thanking them for their support.

Other University of Nebraska representatives scheduled to ride the Big Red Express include: Brian Hastings, President and Chief Executive Officer of the University of Nebraska Foundation; Donde Plowman, Dean of the College of Business Administration; Diane Mendenhall, Executive Director of the Nebraska Alumni Association; Prem Paul, Vice Chancellor for Research and Economic Development; Michelle Waite, Assistant to the Chancellor for Community Relations; Tim Wei, Dean of the College of Engineering and Ellen Weissinger, Senior Vice Chancellor of Academic Affairs. 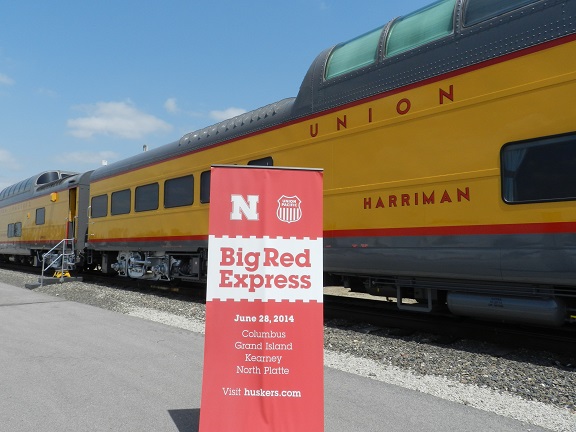 The "Harriman", a dome lounge in UP's Heritage Fleet, will be in the consist for the Big Red Express.