Union Pacific Special Agent Luis De Los Santos has followed a number of paths to arrive where he is today, on the San Antonio Service Unit.

He put college on hold to join the Army National Guard as a military police officer and served overseas in Iraq. Upon returning home, he completed training at the police academy and served in his community as a patrol officer, with occasional assignments to the SWAT team and Narcotics.

When he and his wife anticipated the arrival of their first child, De Los Santos looked for new employment that would afford the opportunity for his wife to stay at home. A cousin who worked for the railroad recommended Union Pacific. "But I didn't want to work on trains," De Los Santos said. "And then he told me that they had their own police force."

"I enjoy the company and the opportunity for advancement here," he said. "I've completed my associate's degree since coming to UP, and will start work on my bachelor's degree this semester."

De Los Santos recommends Union Pacific to other returning veterans. "If you have a Military Occupational Specialty (MOS), it's more than likely there's a UP job that relates. Electricians, mechanics -- we have those. If you were a platoon leader, the Manager of Yard Operations (MYO) would make sense. MPs -- Special Agents. There are similarities and structures that will be familiar, and the demand for professionalism is the same." 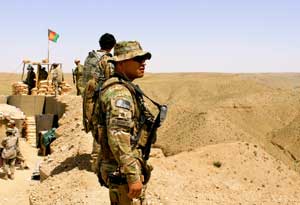 Recently, the 56th Infantry Brigade Combat Team selected De Los Santos to serve in Afghanistan among a dozen other soldiers. During his tenure, he was the non-commissioned officer in charge (NCOIC) for three Afghan Border Police (ABP) checkpoints. He also was the NCOIC for Intelligence, training ABP officers in basic combat operations and weapon familiarization.

As a military police instructor, De Los Santos worked closely with Afghani police, and shared with the Afghan Border Police K-9 team what he had learned working with UP's K-9 crew.

"I learned to use German commands with the dogs through UP's K-9 training, and I had the advice of veteran UP K-9 handlers to help make the transition in Afghanistan fairly easy," De Los Santos said.

De Los Santos is serving his eighth year in the Army National Guard and plans to re-enlist for an additional six years. He will work toward earning both his Airborne Jump wings and the prestigious Ranger Tab. 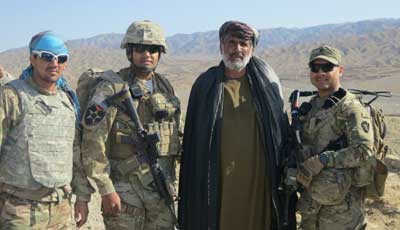