The City of College Station, Texas, marked the 75th anniversary of its incorporation Nov. 16 with a community celebration sponsored by Union Pacific at the George Bush Presidential Library and Museum.

College Station and UP share a rich heritage dating back to the founding of the Agricultural and Mechanical College of Texas (Texas A&M College) in 1876. The site for the new college was selected in large part because of the existence of a Houston and Texas Central (H&TC) Railroad line, which began in Southeast Texas and extended through the area to its terminus in Bryan, five miles north. Although no railroad depot existed at the time of Texas A&M's formal opening, H&TC made regular stops for incoming and outgoing college students and faculty. H&TC railroad conductor announced the stop as “College Station,” giving rise to the name of the surrounding community. Although passenger rail service ceased in 1959, College Station and the railroad, now Union Pacific, have continued to grow together.

UP's goodwill ambassador, the Mini-train, offered free ride throughout the day to the more than 1,000 on hand for the celebration. 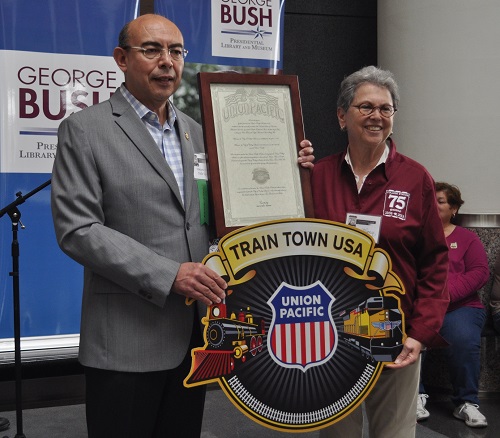 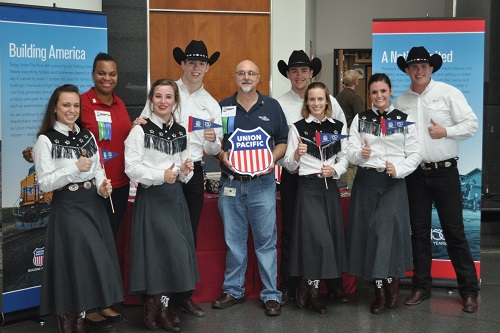 UP locomotive engineer Aundrea White, second from left, and Stuart Schroeder, train dispatcher from the Spring Dispatching Center, center, are joined by the Aggie Wranglers at the UP safety information booth. 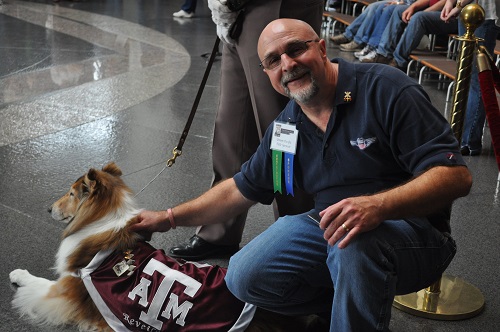 Texas A&M mascott Reveille VIII gets a pet by UP dispatcher Stuart Schroeder.