Representatives from Union Pacific, BNSF Railway, the Federal Railroad Administration (FRA) and local and state officials gathered at Fort Worth's newly upgraded Tower 55 for a Nov. 7 ceremony marking the end of a massive project designed to alleviate congestion at the important intersection of railroad tracks.

While the upgrade began in mid-2013 and was completed Aug. 28 this year, Tower 55's history goes back to 1873. Then, Buckley Burton Paddock saw the potential for Fort Worth as a major rail hub. His idea, created three years before railroads existed in Fort Worth, became reality as the next three decades brought many railroads into the area.

A railroad junction developed south of downtown, with multiple intersecting rail lines. Railroads cooperated to build an interlocking (rail intersection), and the Railroad Commission of Texas designated it Tower 55. It entered service Sept. 26, 1904. Today, it is critical to multiple railroads, connecting traffic nationwide, including Canada and Mexico.

UP and BNSF trains constitute most of Tower 55’s traffic, along with a handful of Amtrak trains. More than 100 freight and passenger trains traverse Tower 55 every day, which, prior to this project, was above its fluid capacity range. Upon arriving at Tower 55, delays of up to 90 minutes occurred daily, often blocking grade crossings.

City arterial intersections were enhanced and two grade crossings closed. A new emergency vehicle access was incorporated to allow for faster response time to a nearby neighborhood.

Completed 13 days ahead of schedule, Tower 55's upgrade is a testament to cooperation between competing railroads and various governmental entities. UP and BNSF partnered to secure a grant from the federal Department of Transportation (DOT) covering about a third of the cost. The railroads contributed two thirds, along with money from the North Central Texas Council of Governments, Fort Worth and the Texas Department of Transportation.

"The spirit of cooperation has stood the test of time, which is why we are standing here today," Fritz said. "Thank you to the elected officials and transportation groups who supported this project. And I thank BNSF. While we are fierce competitors in the marketplace, we often join in an effort of teamwork to benefit our customers and communities."

The Tower 55 improvements benefit the railroads, communities and the environment. The rail intersection can accommodate an estimated 25 percent more train traffic, eliminating significant train delays. Each day, UP and BNSF save enough diesel fuel to equal the annual fuel consumption of 14,000 Fort Worth commuters, slowing carbon dioxide emissions by 93,000 tons per year. Reduced motorist and pedestrian delays save commuters 100,000 hours per year. 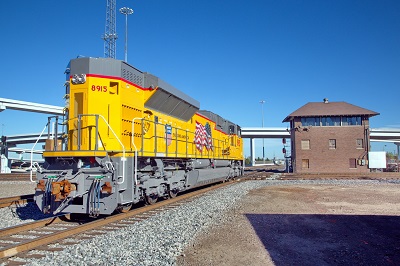 The Tower 55 building stands in the background.