Officials from five of Africa's largest economies recently visited what was touted as the showcase of America's rail and aviation industries — Chicago. And Union Pacific's Proviso Yard was one of the stars.

Proviso Yard, located in the Chicago suburb of Northlake, is home to one of five of UP's four major intermodal terminals. Main line tracks from St. Louis cross the southern portion of Illinois to reach Chicago, and the east-west transcontinental main line across Illinois terminates at Proviso Yard. Proviso is home to Chicago's hump yard, and also Global II, the largest of UP's four major intermodal terminals in the state, handling nearly 300,000 container lifts annually.

The trip to Chicago was one of only two that took the African delegation outside of Washington, D.C., during their time in the U.S. for President Obama's U.S.-Africa Leaders Summit.

"Of all the transportation locations to visit in Chicago, Proviso was recommended as one of the best," said Adrian Guerrero, Union Pacific director - Public Affairs, Chicago.

At both Proviso Yard and Chicago's O'Hare airport, the visiting dignitaries saw live demonstrations of state-of-the-art equipment and technologies manufactured in the U.S., and discussed transportation systems with local experts. At Proviso, the delegates learned about UP's infrastructure, commodities shipped, the 23-state network and commuter rail/freight rail integration.

Dave Grewe, Union Pacific director-Chicago Transportation Coordination Office gave a presentation on overall operations and what takes place between all of the railroads in Chicago through the workings of the CTCO office.

"It is not often we host such events and we were all pretty excited," said Andrey Drozdov, director-Train Management. "At the end of the day, the delegation was able to see first hand how we railroad in America." 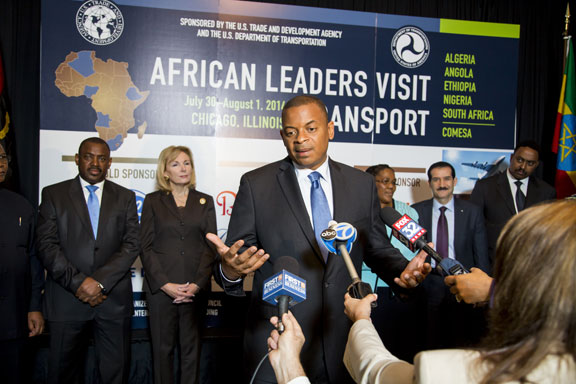 Anthony Foxx, Secretary of Transportation of the United States;