Alcatraz Comes to Yuma, and UP Helps with the Prison Break

Union Pacific in Arizona has been an avid supporter of the Arizona State Parks. So when our neighbors, the Yuma Territorial Prison State Historic Park, asked Union Pacific to sponsor a prison break from Alcatraz, the railroad became a co-conspirator with the Yuma Crossing Heritage Area.

The Yuma Crossing Heritage Area has been hosting a traveling Alcatraz exhibit, sponsored by the Union Pacific Foundation. Recently, the group sponsored a reception to thank volunteers, board members and to bring elected officials down to the historic park area.

The exhibit runs through April 14. 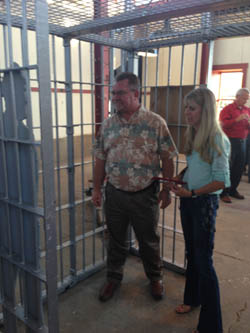 Checking out a prison cell are Russell McCloud, Yuma County Supervisor, left, and Cookie Wagter, a member of the Humane Society of Yuma.