Nevada Governor Brian Sandoval greets children of Battle Mountain, Nevada, after their traditional Basque dance. Battle Mountain was just one of the stops for the Battle Born Express.

Union Pacific was a fledgling railroad in 1864, the year Nevada became a state, but the connection between the railroad and the state is a strong one that not everyone knows.

The railroad was formed in 1862, the result of President Abraham Lincoln signing the Pacific Railway Act. Nevada, a territory short on population, and not yet having Congressional support, was rushed to statehood in 1864 so the state could throw its three electoral votes behind the re-election of that same president.

In 2012, when Union Pacific celebrated its sesquicentennial, steam locomotive No. 844 and cars from the Heritage Fleet traveled throughout the southwest, including Nevada. This year, the "Battle Born Express," another Heritage Fleet Special, traveled Nevada, this time with Gov. Brian Sandoval and Lt. Gov. Brian Krolicki, celebrating the state's birthday and the railroad's significant role in Nevada's heritage and its journey to statehood.

"Union Pacific is proud to celebrate Nevada's sesquicentennial birthday, while also recognizing our joint heritage," said Scott Moore, vice president-Public Affairs, Western Region. "It is a privilege to celebrate this milestone with the state, as well as local communities."

"Battle Born," the state nickname, comes from Nevada's statehood arising during the height of the Civil War.

The special train made stops in Elko, Wells, Winnemucca, West Wendover, Battle Mountain, Lovelock and Sparks, in a celebration of statehood camaraderie and to encourage communities to be proud of their town's legacy and contributions over the last century and a half. 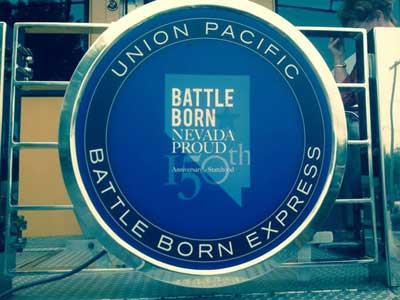 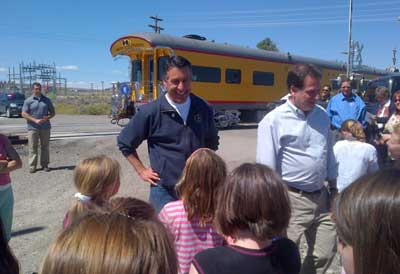