During a ribbon-cutting ceremony at the plant, Iowa Lt. Governor Kim Reynolds officially set the new line for the production of concrete ties in motion, symbolically sending a train on its maiden delivery voyage.

The Lincoln Railport, a new development site in Clinton, Iowa, welcomed The RAIL.ONE Group, a concrete rail tie manufacturer, to the neighborhood this week. The $22 million manufacturing project will bring 65 new jobs to the Greater Clinton region, and a new factory that will produce 600,000 rail ties annually for rail lines across the U.S.

The rail port is approximately 2.5 hours west of Chicago, and is located on the UP main line route, which averages 45 trains per day. "We are excited about this facility and grateful to RAIL.ONE for bringing their concrete tie products to Iowa and Union Pacific," said D. Lynn Kelley, Union Pacific vice president of Supply and Continuous Improvement.

"All parties involved worked quickly and efficiently to make the project a reality," Howes said. "This project provides investment and jobs that will benefit the entire region. We are pleased to welcome RAIL.ONE to our community." 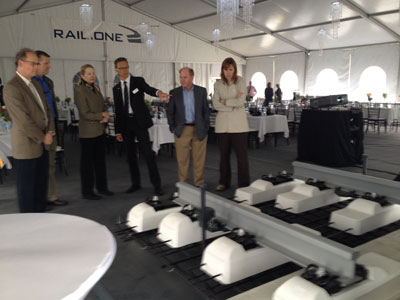