Union Pacific's communities continue benefitting from cooperation between the railroad and various emergency response organizations, with a goal of preventing and preparing for hazardous materials incidents. 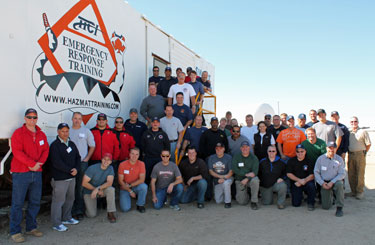 Recently, UP played an integral role in preparedness training and exercises in Colorado and California.

Emergency responders, law enforcement officials and UP managers participated in training courses the weeks of Oct. 1 and 22 at the Association of American Railroads' Security and Emergency Response Training Center (SERTC) in Pueblo, Colo. Students represented 17 of the 23 states in which UP operates, along with managers from the railroad's Claims, Law and Mechanical departments.

For their final exam, students participated in a hazmat drill that emphasized the importance of cooperation between UP and emergency response agencies, and how to work safely on railroad property.