Houston's Nau Center for Texas Cultural Heritage got a boost from the Union Pacific Foundation to help fund construction of an interactive railroad experience exhibit, "Engines of Progress."

"Thanks to Union Pacific's generous gift, guests will leave the Nau Center with a firm understanding of both the historical and modern importance of the railroad industry in Southeast Texas," said John Nau, Chairman of the Nau Center Board of Directors.

The $1 million gift is the largest grant the Foundation has ever made in Texas. "Union Pacific is thrilled to support the efforts of the Nau Center in its mission to tell the remarkable history of Houston and southeast Texas," said Brenda Mainwaring, Union Pacific vice president-Public Affairs, Southern Region. "With its focus on education, the Nau Center will bring history to life for Houston residents and visitors. We're pleased that the region's deep railroading roots will be featured as an important part of that story. "

The "Engines of Progress" exhibit will feature Southern Pacific locomotive No. 982, bringing history to life through the magic of special effects, as the train readies itself for departure, pulls into the station or rockets across the Texas plains. Located in the "Get Big Things Done" gallery, the exhibit will celebrate the history of the Southeast Texas' railroad industry and the major role it played in the development, growth, and economic success of Houston and its people.

The Nau Center is slated to be completed in advance of Super Bowl LI, to be held in Houston's Reliant Stadium in 2017. 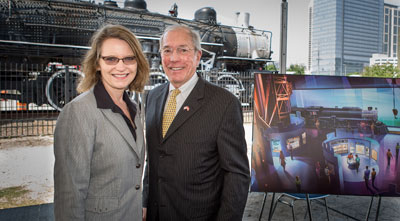