The TRT Gang at work on the Dallas Subdivision.

When the Track Renewal Train (TRT 909) and other large track gangs roll through major cities, the attention of several UP departments is needed to keep employees and the public safe, reduce traffic congestion and enhance the railroad's reputation as a good neighbor.

Such was the case recently when the TRT worked its way through Arlington, Texas, renewing 85,000 ties on a 33-mile stretch between Fort Worth and Dallas, representing a $32 million-plus investment.

A unique tie- and rail-laying operation, the TRT efficiently performs infrastructure maintenance by replacing an entire rail corridor during one continuous project. The work involves multiple machines spread across miles of track at a time, which can block grade crossings and complicate vehicle traffic.

"While we have crossings closed as a result of the TRT work, cities still have to manage traffic congestion, and they have a duty to ensure their residents have adequate police, fire and ambulance protection," said Clint Schelbitzki, director-public affairs.

The average daily vehicle count across Arlington's eight crossings is around 185,000, and UP had to close six of them. Schelbitzki, Jay Farrar, manager-track programs, and Raquel Espinoza, director-corporate relations and media, began meeting with city officials last November, even though the project wasn't scheduled to begin until mid-January.

"It's all about communication. We let the city know our plan 90 days out instead of just showing up and saying, 'Here, we're taking the railroad.' We opened the lines of communication," Farrar said. 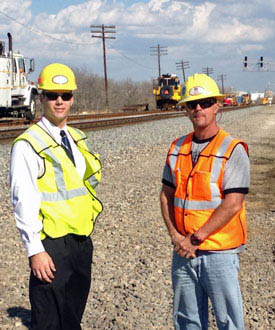 "It's one thing to have a good plan, but it's only a good plan if it's executed correctly. I work with world-class professional railroaders. They're phenomenal."

Initial concerns about traffic gridlock and restricted emergency vehicle access were addressed through preparation and proactive, regular communication. Media and public officials were invited to view the TRT when it arrived in Arlington, and reporters were impressed by the project's potential to improve transportation infrastructure in northern Texas.

When the crossings closed Jan. 17, an aggressive campaign, including webcams and signs throughout the city, kept the public updated on current traffic conditions. The city also released a video of the TRT 909. These efforts benefited the residents and provided optimal work conditions for the track crews, who reopened the crossings Jan. 23, more than a week earlier than projected.

"To use a football analogy, our ongoing and open dialogue with the City of Arlington provided the down field blocking that allowed our TRT equipment to run its course with little interruption," Schelbitzki said. Farrar agreed, adding that Schelbitzki and Espinoza made his job easier.

Arlington widely praised UP, lauding both the communication and the efficient work. In a Star-Telegram article, Keith Melton, director-Arlington public works and transportation, said, "Union Pacific listened to our concerns. They did anything and everything they could to open roadways when they said, but most of the time it was sooner. We absolutely appreciate their efforts in recognizing the inconvenience to Arlington citizens."

Of course, this accomplishment would have been impossible without talented track gangs. "It's one thing to have a good plan, but it's only a good plan if it's executed correctly. I work with world-class professional railroaders. They're phenomenal," Farrar said.