Warrensburg, Missouri, is a small town with a big heart and a long history. Located less than an hour's drive from Kansas City, it's a Union Pacific Train Town, founded along the Pacific Rail Line that still allows for the rumble of rail cars on a daily basis.

City Manager Paula Hertwig Hopkins wanted to advance art in the community, and salute what makes "the 'Burg" great. So she turned to local artist and photographer Janet Bonsall Humphrey. "Paula came up with the theme," Humphrey said, "and then I just ran with it."

The result is a photo collage, "Four Pillars," unveiled at Warrensburg's City Hall this month. Funded with grants from the Union Pacific Foundation and the Walmart Community Grant Program, the project took 18 months to finish and covers almost 200 years of history and community. It started with more than a thousand photos, winnowed down to 200, and was completed in 18 months.

"Now, so many people have heard about the project and want to see it," said Hertwig Hopkins.

The collage is comprised of four panels, one for each "pillar." The complete work covers an entire wall — it's eight feet tall and 24 feet wide. Visitors to City Hall enter the exhibit from the right, and the first panel they see represents the railroad, featuring both old and new Union Pacific locomotives. The intention was for each panel to have some overlap with the next, showing what ties the community together.

The Four Pillars are:

The Railroad - To research this panel, Humphrey visited the depot in town on Holden Street. Standing on the platform, she had never been so close to a train moving at full speed before. "I can still feel the power of it. Its influence on our town, taking goods and services, connecting the states. It was awesome."

The Community - The Community panel represents the history of Warrensburg and what the town is best known for. It includes "all kinds of familiar faces," with scenes from annual festivities including the re-enactment of the Old Drum Trial, the Picadilly Auction fundraiser for Main Street and Dickens' Christmas.

The University of Central Missouri - Home of the Fighting Mules and Jennies, the University was founded in 1871. References to dogs and mules throughout the panels serve as continuing references to early Warrensburg history. Inclusion of the university as a pillar reiterates the message that knowledge is power and aids in the growth of the city. The University now has a student body of more than 12,000 students, coming from 49 states and 59 countries.

Whiteman Air Force Base - Located just 10 minutes outside Warrensburg, Whiteman AFB is home to the B-2 Stealth bomber, a photo of which is seen in the panel. Getting photos of Whiteman "took a little bit of doing," Humphrey said, since she isn't military. Fortunately, she was able to include photos from the Welcome Home festivities at the University for the 135th Attack Reconnaissance Battalion, when they returned from their deployment to Afghanistan.

Many photos in the panels are from Humphrey's personal collection, but also include submissions from friends, co-workers and members of the Professional Photographers of America. "That's what made it a communal effort and not 'all about me,'" Humphrey said.

During the unveiling ceremony, as Mayor Donna DeFrain thanked everyone who made the project possible, a Union Pacific train passed through on the outskirts of town, and blew its whistle, as if to say, "You're welcome!" 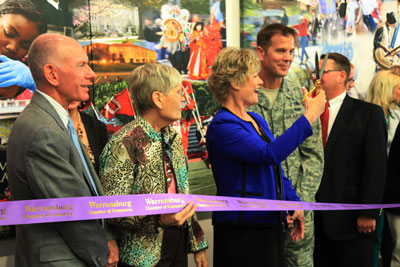