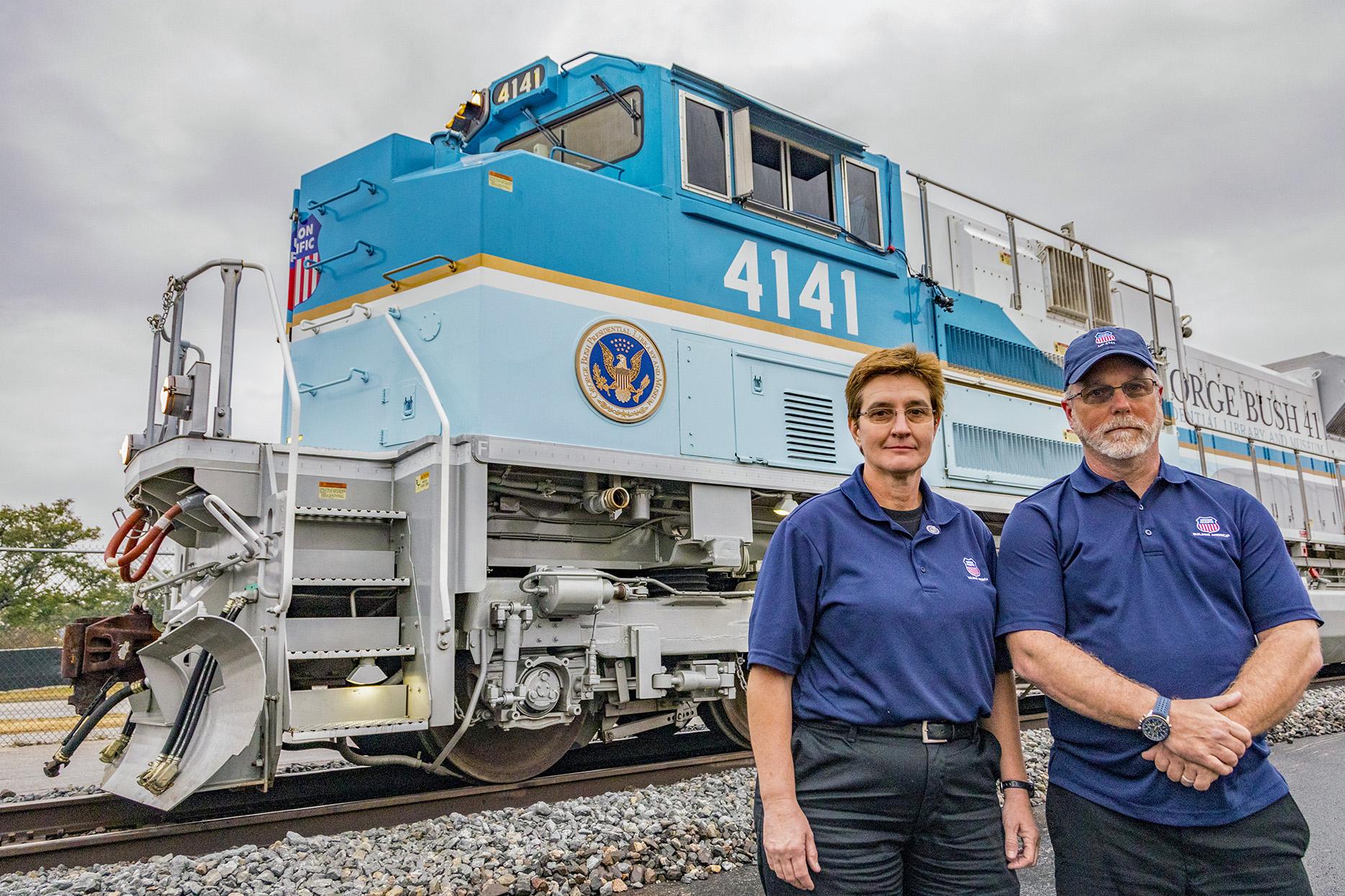 “We took care of a fellow Navy man, a fellow shipmate,” Kuhaneck said. “We were just sailors taking care of another sailor.”

“He was my Commander-in-Chief,” she said. “It was a great honor. He did a lot for our nation. He tried to do well for all people. He should be remembered as a hero.”

Bush was the youngest pilot in U.S. Navy history when he joined the service in 1942. He nearly lost his life during WWII, when his plane was shot down by the Japanese. He was rescued by a U.S. submarine, narrowly avoiding Japanese capture, and paving the way to his 1989 Presidency.

Kuhaneck met Bush in 2005 after the president took over controls of No. 4141 following the unveiling of the custom-painted locomotive that incorporates the colors of Air Force One. He said he and Bush talked for 45 minutes about his time in the military when he served under the president.

“We connected as Navy men,” he said. “Then, come to find out that Barbara was from upstate New York where I’m from, so we had a pretty good conversation about that, too. Those 45 minutes are very special to me; I hold that conversation close.”

Upon being selected to crew locomotive No. 4141 for Bush’s funeral procession, Kuhaneck said he was absolutely honored. “They saw that I take my job seriously,” he said. “I’m so grateful. I wouldn’t have wanted to be anywhere else but right there with him on that day.”

Nobles found out she was selected to operate No. 4141 in September. “They wanted veterans to run it, and Randy and I are both Navy vets,” she said, “but I think my familiarity with the run had a lot to do with it, too. I know the details.”

Kuhaneck and Nobles often operate trains together along the route between Houston and Hearne, Texas, and share camaraderie.

“June and I really trust each other,” he said. “I know she understands the Navy mentality. We protect each other. It’s a different type of love; it’s like a brotherhood. I have that with a lot of veterans and railroaders.”

As the funeral train slowly meandered through East Central Texas, passing through towns like Wellborn, Navasota and Magnolia on its way to College Station, thousands lined the route with flags, flowers, crosses, large signs and formal military salutes.

“It was a very moving event,” Kuhaneck said. “At times I got emotional. This person -- this president -- touched a lot of people. His legacy can be summed up in two words: honesty and integrity.”

"The American Dream means giving it your all, trying your hardest, accomplishing something. And then I’d add to that, giving something back. No definition of a successful life can do anything but include serving others."

Since that rainy December day, co-workers have continued to express pride in how Nobles and Kuhaneck represented the company and the Navy. Kuhaneck said he knows Bush would have been proud, too. “He was extremely honored when the locomotive was revealed in 2005,” he said, “and I know he’d feel the same, if not more so, today.”

Nobles likes to think Bush was watching the proceedings and would have approved of the day’s events, except for one thing: “He probably would have wanted to have operated the locomotive,” she said, smiling.

She said the funeral procession created a renewed sense of unity among the American people.

“I feel like it brought us back together again… healed us a bit,” she said. “Everyone was doing their best to send him off with a great farewell.”